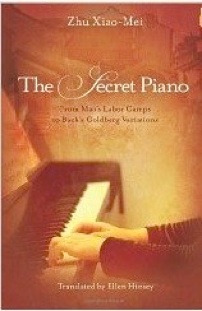 Xiao-Mei's Artist Page on MainlyPiano
Product Links
Amazon (referral)
This site contains affiliate links to products. We may receive a commission for purchases made through these links.
The Secret Piano
Zhu Xiao-Mei
2007 / 2012 Amazon Crossing
317 pages
Review by Kathy Parsons
The Secret Piano is an extraordinary account of one woman’s struggle to keep her passion for music alive during the Cultural Revolution in China and beyond. The daughter of a music teacher, young Xiao-Mei started learning to play the piano at a very early age and was found to be quite gifted. She continued her music studies at the Beijing Conservatory at about the time the Red Guard was taking hold in China, and she relays many accounts of The Guard’s indoctrination of both the students and their teachers. Soon, all the western classical music that could be found was destroyed, and only music composed in China was allowed to be played. The Conservatory gradually ceased to function, and the students were sent to various labor camps in the country. Xiao-Mei was at a camp for about five years, but she managed to smuggle in her spinet piano so she could continue to play in an isolated area of the camp. How Xiao-Mei went from that environment to graduating from The New England Conservatory to becoming a classical concert artist in France is both inspiring and profoundly moving. I’ve been a piano teacher for thirty-one years, so this lesson in recent history was told from a perspective that I could readily relate to and understand, but I was shocked to realize how little I knew about that period of Chinese history even though it was within my own lifetime.

The Secret Piano was written in French and published in 2007. It was translated by Ellen Hinsey and published in English by Amazon Crossing in 2012. The writing flows very smoothly and is so clear that it makes the book very difficult to put down. Many references are made to Laozi, the Chinese philosopher, which also brings insight and understanding. I found this to be a very important book. It reads like a novel, yet is a true story presented as an autobiography. It’s been a long time since a book moved me as much as The Secret Piano has, and I give it my highest recommendation.
June 7, 2012
Xiao-Mei's Artist Page on MainlyPiano
Product Links
Amazon (referral)
This site contains affiliate links to products. We may receive a commission for purchases made through these links.