Greetings and Happy Spring to Everyone!

I hope this finds you well and looking forward to warmer weather and plenty of sunshine! Mom and I got our second COVID vaccinations last week without side-effects, so life seems more hopeful and promising again. One of the things that has really kept me going this past year is the amazing amount of new music that has been created while artists were not touring. And it's still coming in! There is LOTS of new sheet music being published, too, so it's a great time to be a fan of new music, as I am (obviously, right?).

The final installment (for now) of my story and the story of how MainlyPiano.com came to be is the major part of this issue of Pianotes. If you missed the other two installments, they were in the January and March issues - #453 and 455. We'll get back to the usual music trivia next month. Enjoy!
In March 2010, I made a trip back to the Bay Area. The family that was renting my Hercules house was serious (they said) about buying the house, so I was really optimistic. Ironically, on the drive down, I got caught in a speed trap in Redding, CA and a rock hit my windshield on the way back. Had to be a clue that things were not quite right!

In October 2010, I received a notice that all of the web pages that were created with the Apple Homepage software would be deleted from the internet in about a month. I had to scramble to recreate the site using iWeb. This was happening much too often!

In November of 2010, I was asked to proof-read David Lanz's new songbook, published by Hal Leonard. What a thrill! And I've been proofing and editing them ever since. Love it!

In March 2011, Greg Maroney and Wayne Gratz came to do a house concert. Wayne and I had been mail, phone and then online friends for about twenty years, but that was the first time we’d met in person. I’d been reviewing Greg’s music for many years and had been proofing his sheet music for almost as long. What a joy it was to meet them both and have them perform here! Greg Maroney and Wayne Gratz near Florence, OR 2011.


In April 2011, Scott Cossu made the first of many concert appearances here. 
New Reviews: As I mentioned, the amount of new music coming in for review has been incredible! I did several early reviews of albums that are being released in April that will blow your sox off, so keep coming back throughout the month to see what's new. In March, I reviewed albums from Iran, Russia, Germany, and England as well as the USA. I also have reviews of new songbooks by David Lanz and James Michael Stevens, so be sure to check those out, too. You can find links to all of them here.
In December 2011, we hosted "The Three Amigos Pacific Northwest Mini-Concert Tour" with Chad Lawson, Joe Bongiorno and Louis Landon. What an amazing trio! They received the first standing ovation at a house concert that I'd ever experienced. 
In March 2012, Apple discontinued its MobileMe software, so I had to move the site to a new host. Fortunately, that was easy, but the thought scared me to death since I’d already built the site from scratch three times!

The end of August 2012, Mom and I adopted Joey, a mini-Aussie who didn’t stay very mini. 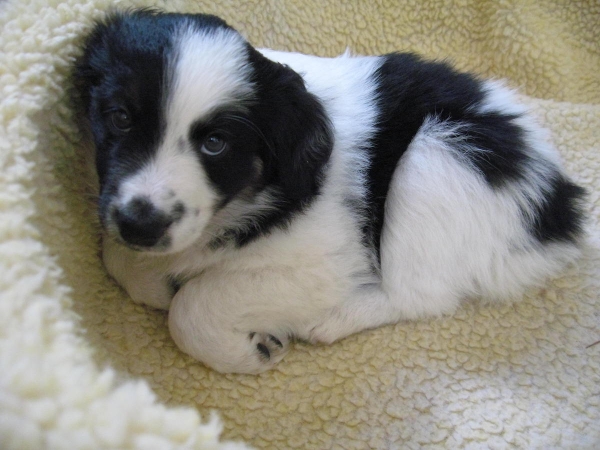 
In September 2012, Fiona Joy Hawkins and Trysette Loosemore brought their "Two Grand, I’m Yours" show to my home in Florence. What a great time we had! 
Our Christmas concert for 2012 was with Joe Bongiorno, Joseph Akins and Philip Wesley - another powerhouse piano trio! Unfortunately, my camera wasn't working, so I don't have any clear photos of them.

New Interviews: In March, I did interviews with Joe Bongiorno and Jonathan Sprout, founder of Force For Good Music. I have quite a line-up of interviews coming, so check back from time to time. You can find all of my interviews here.
On Christmas Eve 2012, I received a mysterious box in the mail from Joe Bongiorno. He had collected donations from a group of Whisperings Artists and bought me a video camera so I could record the concerts here. What an amazing gift!

In January 2013, David Lanz returned to perform two sold-out house concerts. People came from as far as California to see David in such an intimate setting! Such fun and such great music! Pianist/composer Jeff Bjorck flew up from Southern CA to be with us. 
In June 2013, Kevin Kern and his wife, Pam, came for a visit and two concerts. We all lived in the Bay Area when we met, and Kevin had played at my house in Hercules, CA several times. Kevin and Pam moved to Minnesota about the same time Mom and I moved up here to Oregon, so it was a great reunion - and a couple of great concerts! Kevin would often go over to the piano and just play - what a treat! We also celebrated my birthday while they were here. I think I was 39 that year! 
Remember the wonderful tenants who wanted to buy my house in Hercules? Well, they stopped paying rent and had to be evicted a couple of weeks before Christmas 2013. Once I knew they were gone, I went down and found that they had changed the locks on the doors. The key to the side door into the garage still worked, though, so I was able to get in and see all the damage they had done to the house. About $30,000 later, it was ready to put on the market. What a nightmare!

I went back to Hercules in January to sign the listing papers and see the repairs that were done. The house looked brand new again and sold quickly.

April Birthdays: Here is a partial list of some very “notable” birthdays: 
Later in August 2014, I went to Portland for an event and was able to stop and visit with Michael Hoppé before he and his wife moved to Mexico. Michael Hoppé in Portland, OR 2014


Mom was able to sell her Hercules house in September 2014. What a relief it was!

December 2014 was the first Christmas recital I’d had in seven years. One of my online students was able to participate via Skype, which was really fun! In all, twelve students and I played. 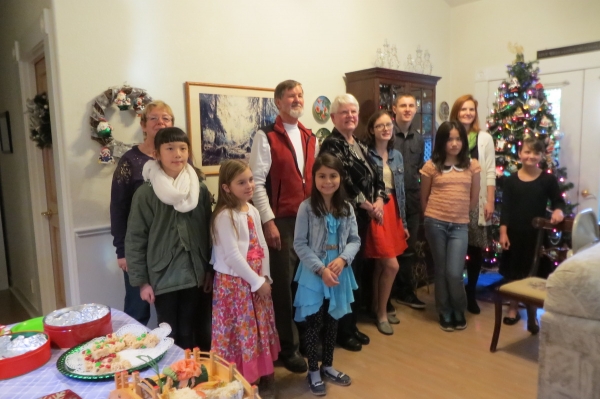 
That's all the news for this month, but I still have some more factoids and photos to share. Have a great month!

Kathy
In January 2015, I went to my first Whisperings Concert and Awards Show in Costa Mesa, CA and was blown away to receive an M.V.P. award/trophy from Whisperings! The trophy was engraved on heavy glass, and I was horrified to see my suitcase being tossed around at the airport in Eugene, OR on the way home. Thankfully, the trophy wasn't damaged, as it is something I will always treasure. 
In February 2016, Robin Spielberg made her first visit to Florence, OR. Robin and I have been friends since the 1990’s and she was one of the first artists I got acquainted with online. It was great to have her with us for a few days and to have her perform here. She came back for another concert in 2018! 
In March 2016, Neil Patton did a concert here, and I was able to play the duet he wrote with David Nevue, "Clockwork," with him. What a blast!!! 
In May 2016, Tim Neumark agreed to do a total redesign of MainlyPiano.com. And what a magnificent job he did!

The all-new and totally redesigned MainlyPiano.com launched the evening of June 29, 2016 and fizzled, thanks to the hosting company. Tim switched it over to a new server, and we lived happily ever after. Once again, THANK YOU, TIM NEUMARK!!!


Here are some more favorite photos from various house concerts. I wish I could include a photo of every concert or even every artist who has performed here, but space won't allow it: Trysette Loosemore, Fiona Joy Hawkins and Kathy hamming it up. 9/12 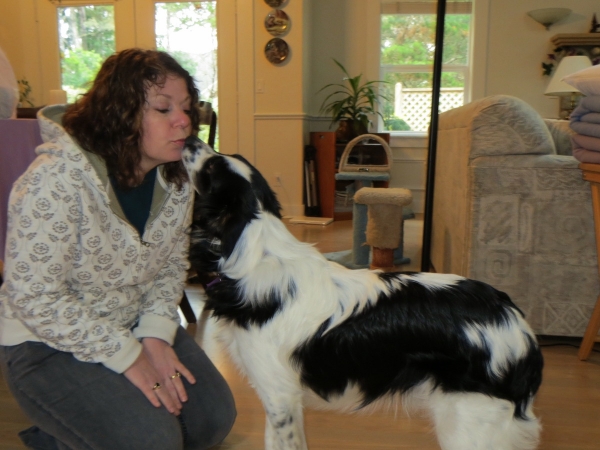 Rhonda Mackert getting acquainted with Joey. 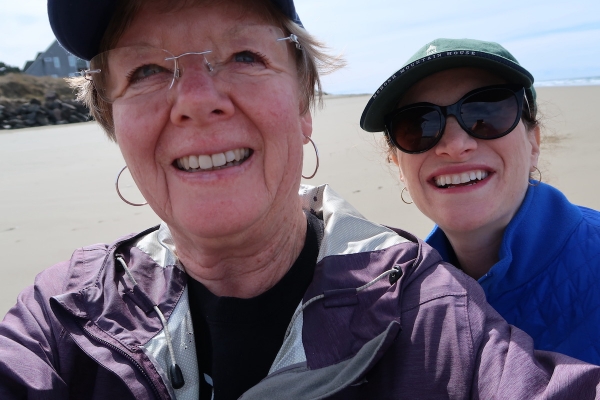 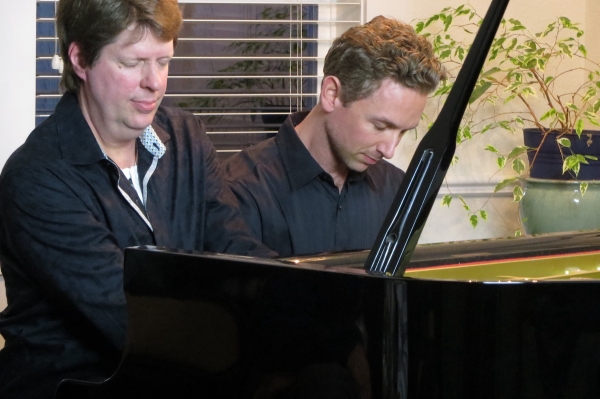 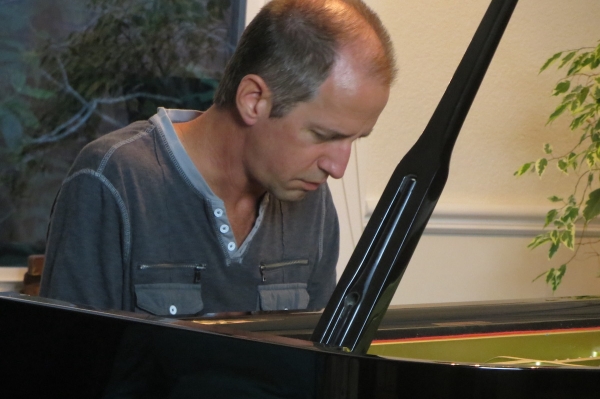