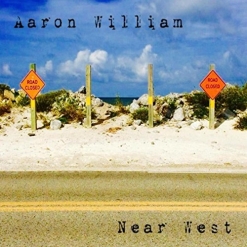 Aaron's Website Aaron's Artist Page on MainlyPiano
Album Links
Amazon (referral)iTunes
This site contains affiliate links to products. We may receive a commission for purchases made through these links.
Near West
Aaron William
2016 / Aaron William Stallone
13 minutes
Review by Kathy Parsons
Near West is a collection of seven short original piano solos by Aaron William. Energetic and often quite intense, these pieces are an eclectic mix of modern classical, jazz, and possibly some movie soundtrack and rock influences. I wasn’t able to find any information about Aaron online, so I don’t know what his background is, but he has certainly developed a pianistic style all his own! If you are looking for calming solo piano, move on, but if you enjoy the energy of a potent cup of coffee, this could work for you! Most of the pieces are made up of a variety of themes that are woven together, perhaps spontaneously, to create colorful musical outbursts that are sometimes fun and always unique.

The album opens with “Sky High” which is a euphoric rush of fingers dancing all over the piano keyboard - I love the passages in the deep bass. The the middle of the piece is calmer and kind of the eye of the storm, gradually gathering the energy for the final burst at the end. “Deleterious” means “causing harm or damage,” and this piece could be the result of anger or revenge. Very dark, passionate, and powerful, it expresses an impressive range of emotions. “Solitude in E-Flat” sounds like it could be pensive and reflective, but most of it is a swirl of turbulent feelings that might require solitude to be dealt with. The final passage is a calmer and more melodic series of flowing broken chords that resolve the piece quite beautifully. “The Offering” sounds somewhat more playful and upbeat although it is still quite ark and dramatic. “Phoebe’s Song” could almost be from a chase scene from an old silent movie. Bright and full of fun, this is my favorite of the seven tracks.

Near West is certainly an interesting debut album and I look forward to seeing what else Aaron William has up his musical sleeve! The album is available from Amazon, iTunes, and CD Baby. Check it out!
October 17, 2016
This review has been tagged as:
Debut Albums
Aaron's Website Aaron's Artist Page on MainlyPiano
Album Links
Amazon (referral)iTunes
This site contains affiliate links to products. We may receive a commission for purchases made through these links.