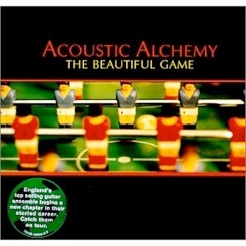 Acoustic Alchemy's Website Acoustic Alchemy's Artist Page on MainlyPiano
Album Links
Amazon (referral)iTunes
This site contains affiliate links to products. We may receive a commission for purchases made through these links.
The Beautiful Game
Acoustic Alchemy
2000 / Higher Octave Music
63 minutes
Review by Michael Debbage
Acoustic Alchemy has long been associated with the Smooth Jazz genre with their early beginnings dating back to the late 1980’s. With their sound pioneered by the efforts of guitar duo Nick Webb and Greg Carmichael, outside help both instrumentally and creatively speaking was always there but there was no doubt that the duo led the charge. With multiple compositions receiving heavy radio rotation over an approximate decade, disaster struck when Nick Webb passed away in 1998 succumbing to the cancer that was eating away at his body. At a complete impasse, the highly prolific band disappeared for over 2 years to finally create and record The Beautiful Game.

With Nick’s huge influence and leadership it was questionable in many minds whether Acoustic Alchemy would even prevail. With no disrespect to the late Webb, Greg Carmichael continued to write with the ever present John Parsons but also found solace and inspiration with fellow guitarist Miles Gilderdale who had been featured on Nick’s last album appearance Positive Thinking. Carmichael not only found inspiration with a new musical partner but the group also signed with a new label Higher Octave Music and were ready for new beginnings.

Frankly, many viewed that The Beautiful Game would be a transitional album at best and this is partially true. Gearing away from the obvious melodies of the past, Carmichael pushed the boundaries of Acoustic Alchemy by stretching the musical exploration without breaking the frame that Webb had delicately created. The experimentation comes courtesy of the fast paced exotic and progressive traits found on “The Last Flamenco” and “Kidstuff”. The results are even better on the driven “Jubilation”, with the percussion and guitar work in complete rhythmic union. In complete contrast, there is the staple Acoustic Alchemy sound of the past courtesy of the gorgeous melodic driven “Trailblazer” and the buoyant “Big Sky Country”. Meanwhile, a significant tribute to the past is evident on the reggae tinged title track that has elements of the well received past hits of “Mr. Chow” and “Jamaica Heartbeat”.

Since the release of The Beautiful Game Acoustic Alchemy have completed 4 studio recordings and 1 live album under the new partnership reflecting that The Beautiful Game was not only a one off chance that the passing of Nick Webb had inspired. Quite the contrary, as Webb’s ingenious ear for a melody continues to live and breathe in the music of Carmichael and Gilderdale better known as Acoustic Alchemy.
August 16, 2011
Acoustic Alchemy's Website Acoustic Alchemy's Artist Page on MainlyPiano
Album Links
Amazon (referral)iTunes
This site contains affiliate links to products. We may receive a commission for purchases made through these links.