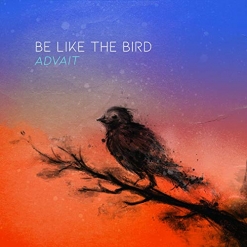 Advait's Website Advait's Artist Page on MainlyPiano
Album Links
Amazon (referral)iTunes
This site contains affiliate links to products. We may receive a commission for purchases made through these links.
Be Like the Bird
Advait
2018 / 733125 Records DK
49 minutes
Review by Kathy Parsons
Be Like the Bird is the second studio album from pianist/keyboardist/composer Advait. His first album, SoulPepper, was released in 2008. The influence of Advait’s favorite composer, Yanni, is obvious, but he is no copycat. Like Yanni’s, Advait’s music is bright and lively and he refers to it as “a sea of optimism.” The title of the album comes from a poem by Victor Hugo: "Be like the bird who, pausing in her flight awhile on boughs too slight, feels them give way beneath her, and yet sings, knowing she hath wings.” The poem reflects the way Advait was feeling when he started writing the music for this album, which was composed and recorded over a four-year period. There are five different pieces and a total of eight tracks. The first five are piano/keyboard with orchestral accompaniment, keeping the piano as the main focus; the last three are solo piano versions of pieces from the first five.

Based in Cambridge, UK, Advait describes his music as “world fusion with a pop feel,” and I think that’s quite accurate. He took about ten years of piano lessons before deciding that a career as a classical concert pianist was not what he wanted. He started writing the music for SoulPepper when he was fifteen and released that album when he was seventeen (2008). I haven’t heard the music from that album, but I’m sure Be Like the Bird has a much more mature point of view.

Be Like the Bird begins with “I Often Remember,” a piece that opens as a piano solo, adding percussion, and then bringing in organ and various keyboard enhancements. It gets the album off to a joyful and energetic start. “Grace” is a swirling, exuberant jazz piece that all but dances out of the music player. Piano and percussion carry the first half of the piece and then flutes are added, sending the spirit soaring even higher. “Song of the Sea” is much calmer and smoother. It is also more orchestrated and has a beautiful flowing quality. Later in the piece, the intensity builds and you can almost feel the motion of the waves - definitely a favorite! “September Days” is more of a ballad that describes the end of summer and the approach of fall. Piano, percussion and light orchestration paint a lovely picture with a variety of sounds. The playful “That’s How It Goes” has a happy spirit that just makes you feel good. The piano stays in the foreground throughout the piece while a variety of other instrumentation gives the piece a bright and colorful sparkle. The last three tracks are solo piano versions of “I Often Remember,” “Grace” and “September Days.”

Be Like the Bird shows great promise from Advait and I’m looking forward to hearing what else he has up his musical sleeves! The album is available from Amazon, iTunes and various streaming sites. Check it out!
June 19, 2019
This review has been tagged as:
Kathy's Picks
Advait's Website Advait's Artist Page on MainlyPiano
Album Links
Amazon (referral)iTunes
This site contains affiliate links to products. We may receive a commission for purchases made through these links.