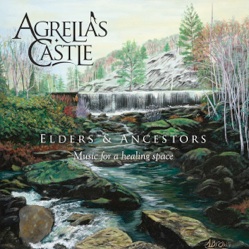 Agrelia’s Castle's Website Agrelia’s Castle's Artist Page on MainlyPiano
Album Links
Amazon (referral)iTunes
This site contains affiliate links to products. We may receive a commission for purchases made through these links.
Elders & Ancestors
Agrelia's Castle
2015 / Mysterium Music
66 minutes
Review by Kathy Parsons
Elders & Ancestors is the first full-length album by Agrelia’s Castle and chronicles their love story and cancer journey. Husband and wife duo, Paul and April Brown, started composing and recording together to create a meditation and relaxation CD for Wind River Cancer Wellness Retreats and discovered that their music spoke to others in a very soothing and calming way. This excerpt from the liner notes explains it best, written by April Brown: “The songs on this CD are very meaningful to me. They have grown from our journey through the cancer landscape. They come from a desire to create peace, joy, and hope in our lives. When I listen to our music, I feel soothed and uplifted. It is my hope that other people, people living with chronic illness or those in caregiver positions, will experience the same soothing, uplifting feelings when they listen to our music. ... This is our humble offering to the world; and for me, it’s a way to give back for all of the help and guidance I have received along the way.” The album consists of seven tracks - six originals and a wonderful arrangement of the traditional folk song, “Wayfaring Stranger,” that features the vocals of Grammy-winning Mike Farris. Paul Brown is a Grammy-nominated producer and keyboardist who appears on the album as composer, percussionist and drummer. April Brown co-composed the original tracks and appears on Native American-style flutes, drums, percussion, and vocals. Tom Shinness appears on guitars and cello and Richard Cushing plays sitar on one track.

Elders & Ancestors begins with the title track, a 14 1/2 minute instrumental piece with a strong Native American influence. Native flutes, hand percussion instruments, wordless vocals, and keyboards create a peaceful and calming atmosphere with a rhythmic pulse that is both infectious and hypnotic. “Adrift” is more ambient and a bit darker. Very sparse and understated, the simple keyboard lines and occasional wordless vocals are mysterious yet soothing. “Breathe” begins with the sounds of birds, wind chimes, and the ocean - all very relaxing. When the music starts, it is lightly rhythmic and sometimes playful. April’s lyrics and vocals send the piece soaring, as do Paul’s keyboards and Cushing’s sitar. At almost 12 1/2 minutes, the piece has plenty of time to unfold at a leisurely pace. “Spirit Dreaming” features April’s haunting Native flutes and vocals surrounded by beautiful keyboard washes and enhancements. “Sonnet” begins as a beautiful piece for Native flute and keyboards, gradually evolving into a love song to both life and a beloved person. Tom Shinness’ poignant cello adds to the deep emotions expressed in the piece. “Wayfaring Stranger” has always been one of my favorite folk songs, and this 10+ minute version is one of my favorites. “Agrelia’s Lullaby” brings the album to a close with a beautiful instrumental piece enhanced by the sound of thunder and rain in the background.

Very best wishes to April Brown and many thanks to Agrelia’s Castle for sharing their journey with the world. I’m sure many will be very positively affected by this music. It is available from Amazon, iTunes, and CD Baby. Recommended!
October 2, 2015
Agrelia’s Castle's Website Agrelia’s Castle's Artist Page on MainlyPiano
Album Links
Amazon (referral)iTunes
This site contains affiliate links to products. We may receive a commission for purchases made through these links.