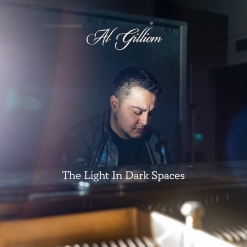 Al's Website Al's Artist Page on MainlyPiano
Album Links
iTunesSpotify
This site contains affiliate links to products. We may receive a commission for purchases made through these links.
The Light in Dark Spaces
Al Gilliom
2020 / Missing Drop Music
70 minutes
Review by Kathy Parsons
The Light in Dark Spaces is the second album from PNW pianist/composer Al Gilliom, following his 2019 debut, A Place of Peace. The twelve original piano solos range from very still and quiet to very bold and lively, making the album difficult to categorize - a good thing, in my opinion! Gilliom’s bio describes him as “introverted to the core” and “the definition of a wallflower.” Despite this, he is very open and vulnerable in his music, allowing us to see deep into his heart and soul - a place of hope and compassion that sometimes becomes dark and turbulent. From the liner notes of the album: “There have been times that I’ve been lost in the darkness - and clinging to hope is how I’ve found my way back to the light. Through it all, the piano has been my refuge. The Light in Dark Spaces weaves threads of hope through the last 2 years of my life and I’m honored to be able to share my life stories with you.”

The album begins with “Letting Go,” a piece that begins slowly and reflectively. At about the half-way point, the tempo and dynamics build to a fever pitch and then fade back down to reprise the quiet of the opening moments - an intriguing start! “The Silver Lining” is even more spare in its beginning moments. The piece builds with strong feelings of sadness, and then opens up to rapid broken chords and runs up and down the piano keyboard that seem almost euphoric. The ending segues directly into “Lucky,” a favorite. The tender opening passages are in the upper octaves of the piano. As the piece evolves, it moves down to the middle of the piano keyboard, becomes livelier and then explodes with a carefree joy. “The Dance” is also a favorite. Composed in a classical style that is both expressive and emotional, it is a musical outpouring of the soul. There are two versions of “The Blue Healer” on the album and both express deep loss, sadness and love - beautiful and very poignant, and I really like both versions. A Place of Peace was the title of Gilliom’s previous album and the piece bearing the same title is subtitled “Star’s Song.” One of the gentler pieces on the album, it’s a graceful and heartfelt tribute to someone dear. “Words Into the Ether” is an introspective 12 1/2-minute piece composed in a peaceful but potent minimalistic style that explores deep inner feelings with the honesty of a soliloquy. “A Tribute to the Victims” could reference far too many incidents in our recent history, so it seems fitting that it isn’t defined specifically which victims are being honored with this music. Almost wrenching in its emotional impact, it’s a gorgeous piece that will leave many listeners deeply moved. The title track brings the album to a close with a message of hope and encouragement.

In addition to the full album, Al Gilliom had released two singles: the title track and the opening piece, “Letting Go.” The album and singles are available from Apple Music/iTunes and streaming sites like Spotify, Soundcloud and Bandcamp. Check ‘em out!
April 14, 2020
This review has been tagged as:
Kathy's Picks
Al's Website Al's Artist Page on MainlyPiano
Album Links
iTunesSpotify
This site contains affiliate links to products. We may receive a commission for purchases made through these links.