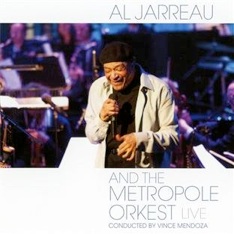 Al's Website Al's Artist Page on MainlyPiano
Album Links
Amazon (referral)iTunes
This site contains affiliate links to products. We may receive a commission for purchases made through these links.
Al Jarreau and the Metropole Orkest Live
Al Jarreau
2012 / Concord Music
62 minutes
Review by Michael Debbage
While very familiar with the mainstream hits of “We’re In This Love Together”, “Moonlighting” and “After All” to name a few, a very good friend was very encouraging in having this reviewer revisit this smooth jazz vocalist or at least what one thought was a smooth jazz vocalist. Upon reexamining a best of collection of Al Jarreau you quickly discover that his overall musical theme is by no means just mainstream but actually a total wanderlust and exploration of jazz, world and R&B just to name a few genres. Well with his most recent recording Al Jarreau and the Metropole Orkest Live why don’t we add elements of big band integrating a great overview of some of his memorable music moments over the decades and more.

First blush of exploring some of Jarreau’s musical past with a full orchestra would suggest a magical journeying of his mellower moments and there is some of that. Classic example would be the previously mentioned “We’re In This Love Together” but even here Al adds his own scatting as the composition comes to an end reminding us ever so briefly what an instrument (almost literally) his vocals can be. Same can be said for the likes of “After All” and the super smooth “Flame” that has Jarreau swooning in complete unison with the full orchestra.

But this superbly arranged and produced recording does not take the easy way out. The orchestra, thanks to the arrangements of long time musical director Joseph Turano and conductor Vince Mendoza also attacks the more complex and upbeat found courtesy of the progressive attitude found on the worldly “Agua De Beber”. Also skip forward and locate the toe tapping light funk of “Scootcha-Booty” with Al’s scatting in fine form especially towards the conclusion of the song. Nevertheless, the best is left until last with the most worldly and progressive track of all courtesy of “Spain (I Recall)” that clocks in over seven minutes of Mr. Jarreau in fine form.

If you are looking for the outright funky highlights of the Earth, Wind & Fire like “Boogie Down” or the exotic “Roof Garden” then you would be better off seeing this 74 year young artist live. This reviewer is speaking from experience that only days ago witnessed Mr. Jarreau bring the Denton Art & Jazz Festival large audience to its feet with a stellar performance. However Al Jarreau and the Metropole Orkest Live is clear evidence that Jarreau is not just jazz, world, and R&B but also let’s add big band. Mr. Jarreau is just Al being Al.

April 27, 2014
This review has been tagged as:
Jazz
Al's Website Al's Artist Page on MainlyPiano
Album Links
Amazon (referral)iTunes
This site contains affiliate links to products. We may receive a commission for purchases made through these links.
More reviews of Al Jarreau albums 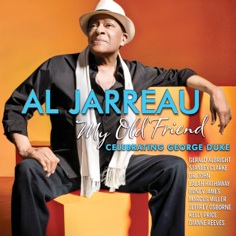