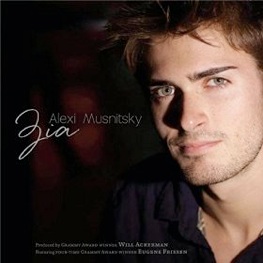 Alexi's Website Alexi's Artist Page on MainlyPiano
Album Links
AmazoniTunesCD Baby
This site contains affiliate links to products. We may receive a commission for purchases made through these links.
Zia
Alexi Musnitsky
2015 / Alexi Musnitsky
42 minutes
Review by Kathy Parsons
Zia is the debut album by Alexi Musnitsky, young pianist born in New Mexico who has spent most of his life in Paris. Musnitsky started his formal classical piano lessons at the tender age of four, and began composing his own music at 18. He made some home recordings and posted them on SoundCloud, where the music received numerous hits and favorable comments. This eventually led to him being named as an “upcoming artist” by the French/Belgian Project, Daybreak, which features interviews and articles on rising stars in the music business. Shortly after that, Will Ackerman reached out to Alexi and asked him to come to Imaginary Road Studios to record his debut album, Zia. What an amazing way to start a career! While I don’t like to compare artists, the beautiful grace and restraint of Musnitsky’s playing and composing styles remind me of Zachary Bruno, another extraordinary young artist with a velvet touch on the piano keys and very deep expression in his music. (Bruno was awarded the 2015 Album of the Year at this year’s Whisperings Solo Piano Radio Awards Show.)

Produced by Will Ackerman, Tom Eaton, and Musnitsky and recorded at Imaginary Road Studios, the seven original tracks include two piano solos, two duets with cellist Eugene Friesen, and three ensemble tracks that include Friesen, Tom Eaton on bass and percussion; and one that includes all of the above plus Noah Wilding’s vocals and Ackerman on Hopi drum. Again, what a way to launch a career!

Zia begins with the title track. A very open and pensive piano solo for the first minute or so, it becomes somewhat more energetic while maintaining the simplicity of the melody - an impressive opening! “War of Love” starts out as a melancholy and touching piano solo, but when Eugene Friesen adds his cello, the piece becomes a heartbreaker with a very big “wow!” factor. “Sparkling Heart” is the second piano solo. Much lighter and more optimistic than “Zia,” it shows a different facet of Musnitsky’s musical personality. “The Quest” begins very simply as a piano solo, building slowly to include Friesen and his cello, then ebbing to a simple piano solo interlude and gradually rebuilding strength and intensity as a duet. At 8 1/2 minutes, the piece has plenty of time to evolve, ending with a gentle whisper. “Light Will Lead the Way” is an upbeat trio for piano, cello, and bass. Graceful and lyrical, it’s a beauty! Reflective of life itself, “Mile of Life” ranges from quiet and still to energetic and enthusiastic. Piano and cello merge to tell a colorful tale with vivid images. “Dream Catcher” brings this excellent debut album to a close with a peaceful piano solo that gradually expands to include the full ensemble of musicians.

Alexi Musnitsky has created an amazing first album (with the help of his friends!) to launch his very promising career! Zia is available from aleximusnitsky.com, Amazon, iTunes, and CD Baby. Very highly recommended!
June 2, 2016
This review has been tagged as:
Debut AlbumsKathy's Picks
Alexi's Website Alexi's Artist Page on MainlyPiano
Album Links
AmazoniTunesCD Baby
This site contains affiliate links to products. We may receive a commission for purchases made through these links.