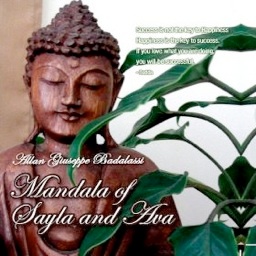 Allan's Website Allan's Artist Page on MainlyPiano
Album Links
Amazon (referral)iTunes
This site contains affiliate links to products. We may receive a commission for purchases made through these links.
Mandala of Sayla and Ava
Allan Giuseppe Badalassi
2009 / AG Badalassi
49 minutes
Review by Kathy Parsons
Mandala of Sayla and Ava is the latest release from Tasmanian composer/pianist/master chef Allan Giuseppe Badalassi. The first half of the album is a series of duets for piano and flute (Stacey Joyce) and the second half is solo piano. Very classical in nature, the music is often complex and experimental. Much of the piano music is built on repeating patterns on one hand while the other carries a melody. In the duets, the flute is usually the “voice” while the piano provides drama and color. I assume that quite a lot of the music is improvised. Badalassi composes music to bring out the drama in each instrument, so not all of the CD is suitable for quiet contemplation. There are places where the flute seems harsh to my ears, but that certainly contributes to the dramatic effect of the music. The piano solos are smooth and flowing, and I have to admit that I prefer them. Badalassi often composes for film, and there is a very visual element in his music.

Mandala of Sayla and Ava begins with Badalassi’s arrangement of Erik Satie’s “1st Gymnopedie,” one of my favorite classical pieces. Having the flute carry the mournful melody is haunting. Badalassi’s piano part isn’t quite as spare as the original, making it an interesting interpretation of the piece. “Dreaming” begins quietly and gently as a piano solo, and when the flute enters, it is almost ethereal. About two minutes into the piece, Badalassi picks up the tempo and energy level while the flute remains serene. A bit later, both artists really let go. After the peak of excitement, the music quiets and becomes a gentle dream once more. The simply titled “Piano and Flute” begins with a piano intro and when the flute enters, it creates a lovely ballad with the piano. Picking up the tempo at the halfway point, the piano sets a darker and more jazz-like tone, and the intensity continues to build through the end of the piece. “For Narelle” is a lovely piece composed for Badalassi’s wife. Hypnotic with a gentle grace, this is my favorite of the duets. “Bruny Island” is the first of the piano solos. Very spare and soft-spoken yet intense, it paints a vivid picture of a mysterious place. “Aria” is my favorite of the solos. The effect of the rolling left hand accompanying a simple but very beautiful melody is both soothing and exciting. I also really like “Due Spirito Legature Da Uno” - gentle and graceful with a touch of mystery. The album closes with “The Thought,” another favorite. Lightly dancing on the piano keys, Badalassi creates a carefree mood and never stops moving. As the piece progresses, it becomes darker and more intense, building to a climax and ending abruptly.

Mandala of Sayla and Ava is a fascinating album for those who like experimental music with an edge. It is available from Amazon and iTunes.
October 18, 2010
Allan's Website Allan's Artist Page on MainlyPiano
Album Links
Amazon (referral)iTunes
This site contains affiliate links to products. We may receive a commission for purchases made through these links.