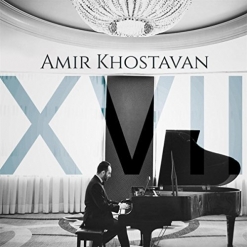 Amir's Website Amir's Artist Page on MainlyPiano
Album Links
Amazon (referral)iTunesCD Baby
This site contains affiliate links to products. We may receive a commission for purchases made through these links.
XVII
Amir Khostavan
2016 / Amir Khostavan
49 minutes
Review by Kathy Parsons
Fans of the powerful, piano-based and emotionally-charged music that made Yanni famous in the early years of his career, take heed! I would like to introduce you to Amir Khostavan, a composer/pianist/keyboardist/guitarist with the same kind of musical energy and passion as his Greek predecessor but who is by no means a clone or a wannabe. Khostavan wrote and recorded his first piece at the age of 7 and released it on a major Iranian label in 1992. He often appeared on television performing his own compositions - even before he started piano lessons. Khostavan wrote hundreds of songs throughout his teens, eventually abandoning the piano for the electric guitar and playing in and writing music for punk rock bands. He eventually earned his audio engineering certification from the Los Angeles Recording School and started bringing the piano back into his music. Khostavan returned home to Los Gatos, CA and opened his own music academy. XVII is his first album and contains ten original compositions that feature piano, strings, electric guitar, percussion, and so much more. Comparisons to Yanni are inevitable, but Khostavan describes his music as a combination of Yanni and Hans Zimmer with a bit of Ludovico Einaudi and Yiruma. This is really exciting music and I’m anxious to help get the word out about this debut album!

XVII begins with “Midnight Chaos,” a high-energy piece with a big, orchestrated sound swirling around the piano - and then the electric guitar takes over. What is really interesting about this piece is how Khostavan has seamlessly woven together elements of ethnic, hard rock, symphonic classical, and soundtrack music, easily moving from one to the next. It’s a great first impression! “San Remo” starts out serenely with piano, strings and light percussion. Its poignant and touching melody becomes much bigger and more dramatic, quiets, and then swells to full orchestration and piano - a great romantic ballad that gently fades out at the end. “Levitate” introduces ethnic instrumentation in addition to the piano, electric guitar and flute - colorful, energetic and often intense. “Reminor” is something of a mysterious waltz for piano and strings - beautiful! Although very sad, “10 Hours Too Late” is mostly piano with some sound effects - late-night musings from the heart. Strings are added here and there to enhance the poignance of the gorgeous melody. “Chambers” is a favorite. It begins with flowing broken chords on the piano and string washes in the background. More instrumentation is added as the piece evolves, but the piano stays in the lead, becoming ever more passionate and emotional - love it! I don’t know how anyone’s fingers can move as fast as Khostavan’s do on the piano keys in “Phoenix,” a powerful and triumphant celebration. I really like this one, too, and the way it combines several cultures and genres of music. “Over the Airwaves” pulls out all the stops for the closing track of the album. Piano and cello start it off, adding percussion and more orchestration for a big emotional swell that continues through the most of the piece, then suddenly dropping down to guitar and piano and fading out. Wow!

XVII is a fantastic debut and I predict great things for Amir Khostavan! The album is available from Amazon, iTunes, and CD Baby. Very highly recommended!
October 28, 2016
This review has been tagged as:
Debut AlbumsKathy's Favorites: 2016Kathy's Picks
Amir's Website Amir's Artist Page on MainlyPiano
Album Links
Amazon (referral)iTunesCD Baby
This site contains affiliate links to products. We may receive a commission for purchases made through these links.