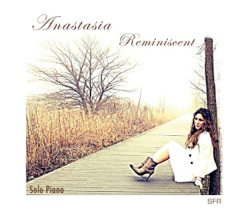 Anastasia's Website Anastasia's Artist Page on MainlyPiano
Album Links
Amazon (referral)iTunes
This site contains affiliate links to products. We may receive a commission for purchases made through these links.
Reminiscent
Anastasia
2015 / Secret Formula Records, Inc.
47 minutes
Review by Kathy Parsons
Reminiscent is the debut recording from Anastasia, a classically-trained composer/pianist who grew up in Munich, Germany; South Carolina and New Jersey. She began playing the piano at the age of five and performed and placed in a variety of classical competitions throughout her childhood. She started composing music at the age of nine, and the eighteen tracks on her album reflect on childhood and adolescent memories. The music is warm and graceful as well as masterfully and expressively played - a very promising debut! Most of the tracks are fairly short - only three go over the three-minute mark - and while the mood of the music is fairly consistent from one piece to the next, each is a self-contained gem. The only thing I don’t love about this album is that it was recorded on a digital piano. It’s a good one, and I know a lot of people can’t hear the difference, but the rich resonance of a good acoustic just isn’t quite there. That said, Reminiscent offers a peaceful listening experience that is on the quieter side while expressing a range of passions and deep emotions.

There are too many tracks on Reminiscent to describe them all, but I’ll tell you about some of the highlights. It opens with “Reminiscing,” a bittersweet song without words that immediately made my ears sit up and take notice - a beautiful beginning! “Taken Away” is a poignant favorite played with tender affection. Anastasia has dedicated “Thank You Gary” to “a wonderful young man named Gary Fan, who tragically passed away in a car accident at the age of 17. "He has inspired me in many ways through his character, ambition and talent” (quote from Anastasia). Joyous and effervescent, it’s one of the more upbeat pieces on the album. “Dionysius” has a passionate, magical quality that I really like. Slightly mysterious, it goes through several really interesting thematic changes, painting a colorful music portrait. “Nostalgic” expresses deep longing while reflecting on the past. “Lessons Learned” seems to convey both confidence and a sense of caution - moving forward boldly and then thinking twice - a very interesting dichotomy. “Determined” is another favorite. A bit on the dark side, it expresses a sense of forward motion fueled by emotional energy. “True Happiness” ends the album on a warm and blissful note with a piece that describes that sought-after state of being with a tapestry of musical themes woven together to demonstrate various stages of true happiness.

Reminiscent launches a new and distinctive voice into the contemporary solo piano genre, and I hope that this is only the beginning for Anastasia. Her album is available from Amazon, iTunes and CD Baby. Recommended!
May 31, 2015
This review has been tagged as:
Debut Albums
Anastasia's Website Anastasia's Artist Page on MainlyPiano
Album Links
Amazon (referral)iTunes
This site contains affiliate links to products. We may receive a commission for purchases made through these links.
More reviews of Anastasia albums 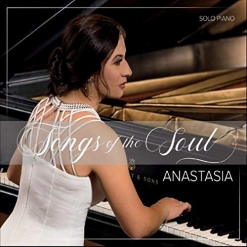