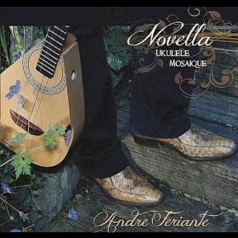 Andre's Website Andre's Artist Page on MainlyPiano
Album Links
Amazon (referral)iTunes
This site contains affiliate links to products. We may receive a commission for purchases made through these links.
Novella: Ukelele Mosaique
Andre Feriante
2012 / Lumar Records
44 minutes
Review by Kathy Parsons
When I received Novella: Ukelele Mosaique for review, my thoughts immediately turned to Tiny Tim and “Tiptoe Through the Tulips.” Oh puh-leeze!!! A whole album of improvised ukelele music? Good thing I was feeling adventurous or I would have missed out on a truly unique musical experience. Guitar virtuoso Andre Feriante met master craftsman David Poplar at one of Feriante’s Seattle-area guitar concerts and the two collaborated on making five different versions of the ukelele. One is a six-string model with a ukelele body and a guitar neck; there is a five-string version; a tenor four-string; a three-string ukelele that looks and sounds like an ancient Celtic instrument; and a traditional concert model. Trained as a classical guitarist from a very young age (including a stint with the legendary Andres Segovia), there is a much stronger Latin/Spanish influence in these ten improvisations (all recorded in a single night) than the Hawaiian stylings usually associated with the ukelele. The liner notes indicate which instrument was used as well as descriptions of each song. An experiment in musical storytelling, Novella is a one-of-a kind listening experience that incorporates Celtic, Spanish, Italian, Hawaiian and American blues influences that reflect Feriante’s world travels and eclectic artistry.

Novella begins with “Rio By Night,” which expresses the restful calm of the beach at the end of an adventure. Peaceful and very relaxed, it’s a beautiful beginning. “Of Wing and Wing” goes to Hawaii where exotic birds are dancing over the water. This magical piece conveys bright, sparkling water as well as the freedom of the colorful birds. “Arabesque” is a dark and haunting Moorish serenade played on the six-string ukelele (which sounds more like a fine classical guitar). “La Portuguesa” speaks to the uke’s Spanish Old World roots, and Feriante’s four-string ukelele also sounds very much like a full-sized classical guitar. Blues on the ukelele? Yep! “Sweet Nadine” delivers with the most American-sounding song on the album. “Othello’s Dream” is a light and gentle musical depiction of England during Shakespearean times. “Eyes In the Forest” is a dark minor-key exploration, much of which is played in the bass of the six-string ukelele. Free-form and haunting, it brings this fascinating album to a close.

Put aside your thoughts of what a traditional ukelele sounds like and prepare to be mesmerized by Andre Feriante’s new take on this instrument. Novella: Ukelele Mosaique is available from andreferiante.com, Amazon, iTunes, and CD Baby. Check it out!
December 11, 2013
This review has been tagged as:
Other Solo Instruments
Andre's Website Andre's Artist Page on MainlyPiano
Album Links
Amazon (referral)iTunes
This site contains affiliate links to products. We may receive a commission for purchases made through these links.