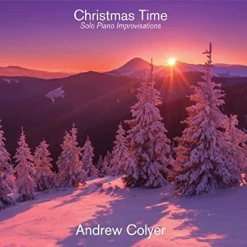 Andrew's Website Andrew's Artist Page on MainlyPiano
Album Links
Amazon (referral)Apple/iTunesSpotifyBandcamp
This site contains affiliate links to products. We may receive a commission for purchases made through these links.
Christmas Time
Andrew Colyer
2018 / Inner Nova Music
49 minutes
Review by Kathy Parsons
As someone who has taught Christmas music for more than 30 years to piano students of all ages and playing levels, I can really appreciate a Christmas album that is different and original, and Andrew Colyer’s 2018 Christmas Time definitely qualifies! A collection of eleven first-take improvisations on six familiar Christmas songs and four originals (one song is on two different tracks), captured “without arrangement, without thought, and without refinement.” The album received a bronze medal from the Global Music Awards.

To quote one of my previous reviews: “Andrew has sung and played piano, keyboards and trumpet across the US, England, Canada and Japan; he has performed at Carnegie Hall three times. Classically-trained at Juilliard, Colyer’s musical resumé is literally all over the map - from rock and prog-rock to jazz and big band to scoring for radio, video and film - and that eclectic background merges to create a style and approach that is unique and original. The list of artists and groups Andrew has performed and collaborated with is an impressive “Who’s Who” of contemporary music.” Christmas Time (2018) was the third of his four solo piano albums.

Christmas Time begins with a one-note-at-a-time phrase from “Silent Night” before adding jazz chords to it and fleshing out the melody - slow, graceful and atmospheric. There is a very short pause between verses and the second verse has a more flowing left hand. It’s a beautiful update to what is probably the most popular Christmas song ever. “Jingle Bells” becomes a slow, slightly melancholy ballad. I don’t think I’ve ever heard this song played so soulfully. Vince Guaraldi’s “Christmas Time is Here” from “A Charlie Brown Christmas” appears on two tracks. On the first one, the song really isn’t recognizable for the first minute or so, and then the melody enters in short phrases before becoming very dreamy and wistful. I really love this song, and Andrew makes it magical. “Melancholy Holiday” was inspired after attending a George Winston concert, and is a very dark and haunting reminder that that holidays aren’t always joyful for everyone - a favorite! Going in a completely different direction, “Let It Snow In New Orleans” is an upbeat jazz toe-tapper. It’s not one of my favorite carols, but I love this arrangement of it! “A Night in Brooklyn,” one of the originals, is reflective and very poignant. I can easily imagine this piece being created late at night by the light of a candle - another favorite. “We 3 Kings…in 5” is definitely different with an odd meter and jazz chords! I always find it fascinating how this song adapts so well to a wide variety of styles. “Ode To George” was also inspired after seeing George Winston in concert and captures the spirit of some of the music on his December album. The second version of “Christmas Time Is Here” is immediately recognizable - wistful and poignant. “Have Yourself A Merry Little Christmas” is one of the more popular contemporary carols, and Andrew’s version is melancholy and from the heart. The last track is an 18-minute improvisation called “Hawaiian Healing Meditation.” Andrew meditated on an ancient healing prayer while improvising the music. The prayer is: “I love you. I’m sorry. Please forgive me. Thank you.” That spirit of openness and peacefulness carries through the full piece as it soothes away any stress and anxiety. This music can be especially healing and calming during this difficult holiday season when so many people won’t be able to be with family and loved ones.

Christmas Time is truly an exceptional Christmas album and is available from Amazon, Apple Music/iTunes and streaming sites like Spotify. Very highly recommended!

November 28, 2020
This review has been tagged as:
Holiday AlbumsHoliday Albums: 2020
Andrew's Website Andrew's Artist Page on MainlyPiano
Album Links
Amazon (referral)Apple/iTunesSpotifyBandcamp
This site contains affiliate links to products. We may receive a commission for purchases made through these links.
More reviews of Andrew Colyer albums 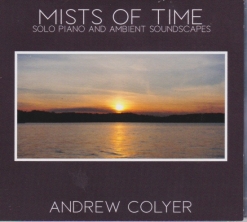