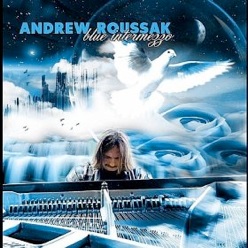 Andrew's Website Andrew's Artist Page on MainlyPiano
Album Links
Amazon (referral)iTunes
This site contains affiliate links to products. We may receive a commission for purchases made through these links.
Blue Intermezzo
Andrew Roussak
2010 / MUSEA
49 minutes
Review by Kathy Parsons
Every once in a while a CD comes across my desk that just blows me away. Andrew Roussak’s Blue Intermezzo is such an album. Roussak was named Best Keyboard Player and Best Instrumental Soloist in the 2006 German Pop and Rock Awards, so he has obviously established himself in the German music scene - especially in the Prog Rock genre. Hopefully he is on his way to becoming recognized internationally.

Roussak was born in Russia and started learning the piano at the age of seven. He graduated from the Ufa State College of Arts as a pianist and was employed as a studio musician and as chief musical editor at the local broadcast station. He relocated to Germany in 2001, working as a freelance artist, playing concert gigs, writing orchestra scores, doing studio work, and teaching piano and keyboard lessons. One of the things that makes Roussak unique is that he seems to be equally comfortable with classical, jazz, and rock music and often combines the styles within the same pieces. His mastery of the piano is readily apparent with dazzling fingerwork and impeccable technique. I would be reluctant to call this “new age” piano because of the big sound of Roussak’s music, yet it’s more complex than rock, not quite classical, and not quite jazz. That makes Roussak an artist who defies categorization - a true original!

Blue Intermezzo begins with “All Good Things,” an “unplugged” version of a piece that Roussak composed for his 2006 debut No Trespassing. From the beginning, we are introduced to Roussak’s eclectic style and virtuosity at the piano. “Greensleeves” is given a very unusual treatment that is probably closest to jazz. With fingers dancing all over the piano at a lively tempo, Roussak makes this classic his own. “Strange Tango” is dark and very dramatic. “Irreducible Simplicity” is definitely more on the jazz side - rhythmic and infectious with a sense of effortless fun. Love it! “Illiade Book 6 - Swap Armour” and “Illiade Book 8 - Divine Withdrawal” were composed for an international piano project, “Progressive Duels On Grand Piano.” Each piece is a little longer than six minutes and each tells a tale from Homer’s epic novel, exhibiting a full range of emotions from big and powerful to tender and loving. Breathtaking! “Nocturne For Julia” is a gentle and soothing love song that shows us another facet of Roussak’s composing style. “Forgotten Walce” asks if Chopin would be using jazz harmonies if he had been born a century later and demonstrates what that might sound like. Brilliant! “Portraits of My Friends” is a sweet and nostalgic piece that pays homage to friends who have come and gone over the years. The last two pieces on the album are bonus tracks that are arrangements of two of JS Bach’s pieces. “Schafe Konnen Sicher Weiden” is an aria from the so-called “Hunting Cantata,” BWV 208, and what a gorgeous interpretation it is. Contemporary yet true to the original, it’s a must-hear! So is “Wir Eilen Mit Schwachen Doch Emsigen Schritten,” a lively and joyful piece originally composed as a vocal duet. A great way to end an incredible album!

Blue Intermezzo is a breath of fresh air and I look forward to hearing more music from Andrew Roussak for many years to come! The album is available from andrew-roussak.com, Amazon, iTunes, and CD Baby. I give it my highest recommendation!
December 13, 2010
This review has been tagged as:
Kathy's Favorites: 2010
Andrew's Website Andrew's Artist Page on MainlyPiano
Album Links
Amazon (referral)iTunes
This site contains affiliate links to products. We may receive a commission for purchases made through these links.