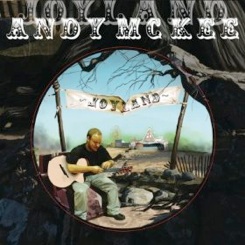 Andy's Website Andy's Artist Page on MainlyPiano
Album Links
Amazon (referral)iTunes
This site contains affiliate links to products. We may receive a commission for purchases made through these links.
Joyland
Andy McKee
2010 / Razor & Tie
40 minutes
Review by Michael Debbage
While music is dominated by guitar players, finding an innovator is a much more difficult task. Of course the likes of the feedback king Jimi Hendrix or the jazz based fret tapping of Stanley Jordan expanded into the electric arena by Eddie Van Halen creates not just a musical experience but an audio adventure land. So how what happens when you extend that fret tapping by adding your guitar as a percussive instrument and sometimes in almost seamless unison? Better yet how about making this unique musical style not only technically brilliant but also warm and accessible? Look no further to the latest offering from Andy McKee.

Of the ten tracks present on Joyland, eight of them are self composed and all of them with a clinical crystal clear self production. The two covers are the bouncy melodic Tears For Fears hit “Everybody Wants To Rule The World” in completely contrast with the more technically driven Michael Hedges cover “Layover”. The remaining balance of the album is solely focused on McKee with the driving “Hunter’s Moon” being one of the many standout tracks. If you are impressed with this delightful ear candy supplement it with a visit to YouTube and you will see but still not believe your eyes. But let’s back track as the album opens with the rhythmic and hypnotic title track which also features McKee on the cello and glockenspiel. McKee even entertains us with the more folksy and compelling “Never Grow Old” featuring Shawn Pelton on drums. This would be a great song to accompany you on a drive on a winding country road laced with arching trees and a rainbow of autumn colored leaves. But McKee leaves the best for last with the melancholy reflective “For Now” that closes this compelling album.

Joyland includes a bonus DVD that documents Andy McKee’s early beginnings as a music instructor in a Kansas guitar shop phasing into the significant exposure he secured via the social media outlet YouTube. And while America has not completely caught on to this rising innovative but warm guitarist, it is only a matter of time before McKee will be a household name courtesy of his creative spirit that is grounded in a terrain of overflowing joy.
November 5, 2011
This review has been tagged as:
Guitar music
Andy's Website Andy's Artist Page on MainlyPiano
Album Links
Amazon (referral)iTunes
This site contains affiliate links to products. We may receive a commission for purchases made through these links.