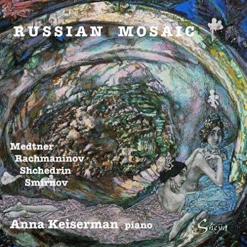 Dr. Keiserman began her piano studies at the age of 5 at the Volgograd Music School. As a teenager, she received national awards and played her first recital at the age of 14. She debuted with the Volgograd State Symphony Orchestra at 15 and continued her professional education at Volgograd Serebriakov College. She completed her Bachelor’s and Master’s degrees in Piano Performance at Gnessin’s State Academy in Moscow. She relocated to the US in 2011 and received a Master’s Degree in Piano Performance from the University of Minnesota and her Doctorate of Musical Arts from Rutgers University. She has won prizes at several national and international competitions and has toured as a soloist and as a chamber musician through Russia, Italy and Germany. She has served as an Adjunct Instructor at NYU Steinhardt Department of Music and Performing Arts Professions and as Adjunct Faculty at William Patterson University and Rutgers University.

The first eight tracks on the album are Rachmaninov’s Etudes-Tableaux Op. 33. Composed in 1911, they are varied both emotionally and stylistically - from big, bold and very demanding of the pianist to almost fragile and heartbreakingly sad, often all within the same piece! I especially like #1 in F minor, a bright and adventurous piece with a very dynamic left hand; #7 in G minor, elegantly mysterious and compellingly expressive; and #9 in C# minor with its occasional references to Rachmaninov’s earlier and very famous prelude in the same key.

Medtner’s is represented by his Sonata in G minor, Op. 22, a three-movement sonata that plays without a break between the movements. The first and third movements are very fast and intricate and the second is much slower, although it sounds as challenging as the faster movements!

Shchedrin is represented by four pieces. “A la Albeniz” was dedicated to ballerina Maya Plisetskaya and is a tribute to the Spanish composer of the title. “Troika” is lively and colorful. “Two Polyphonic Pieces” were written as the required selection for the 1962 Tchaikovsky International Piano Competition and were originally conceived as a set although they are often performed separately. Dr. Keiserman’s technique sparkles and dances all over the piano keyboard!

And then there is Grigory Smirnov’s “Elegy,” a piece I have fallen in love with - so much so that I bought the sheet music and am working on it myself! Very different from most of the other pieces on the album, the lyrical beauty of the melody and the emotional depth of expression are much more contemporary. It is absolutely the perfect piece to close this very exceptional album.

Russian Mosaic is available from Amazon, iTunes and CD Baby.

April 13, 2019
This review has been tagged as:
ClassicalDebut AlbumsKathy's PicksModern Classical
Anna's Website Anna's Artist Page on MainlyPiano
Album Links
Amazon (referral)iTunes
This site contains affiliate links to products. We may receive a commission for purchases made through these links.