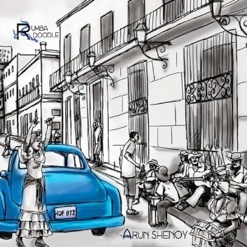 Arun's Website Arun's Artist Page on MainlyPiano
Album Links
Amazon (referral)iTunes
This site contains affiliate links to products. We may receive a commission for purchases made through these links.
Rumbadoodle
Arun Shenoy
2012 / Arun Shenoy Music
43 minutes
Review by Michael Debbage
With eye catching artwork, it was very surprising to discover that the ear candy found on Rumbadoodle was just as strikingly seducing. Born in India and raised in Singapore, composer and producer Arun Shenoy, with the help of his musical friends has created a significant solo debut. Entrenched in the flamenco guitar genre, Rumbadoodle presents a very global perspective with hints of jazz, fusion and even smaller elements of rock. The latter can be heard on the brooding “Blue Sky Happiness Part I and II”. The album title hints to this wanderlust, as Shenoy draws from multiple genres and influences with little or no consideration to musical boundaries or limiters.

How impressive is Rumbadoodle? Shenoy’s efforts were recognized with a Grammy nomination in the Best Pop Instrumental Album category along with his peers Chris Botti, Larry Carlton, Dave Koz and Albright & Brown. Shenoy was certainly in impressive company, especially with a debut album, leaving him with the challenge of outdoing himself next time around. Considering the notable results find here this will be an audacious task.
June 30, 2013
This review has been tagged as:
Debut AlbumsGrammy NomineesGuitar music
Arun's Website Arun's Artist Page on MainlyPiano
Album Links
Amazon (referral)iTunes
This site contains affiliate links to products. We may receive a commission for purchases made through these links.
More reviews of Arun Shenoy albums