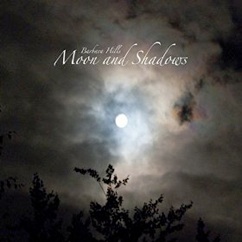 Barbara's Website Barbara's Artist Page on MainlyPiano
Album Links
Amazon (referral)iTunes
This site contains affiliate links to products. We may receive a commission for purchases made through these links.
Moon and Shadows
Barbara Hills
2014 / Barbara Hills
Disc 1: 38 minutes
Disc 2: 42 minutes
Review by Kathy Parsons
Moon and Shadows is a two-CD set by British composer-synthesist-producer-photographer-engineer-painter, etc. Barbara Hills. The music was compiled from two digital-download albums, Moon On the Moat and In the Shadows of Roasting Spring. All twenty-four (twelve on each disc) titles have nature themes, as does the accompanying booklet of original photos of areas around Hills’ home in the mountains of Montgomeryshire, Wales. Hills calls herself “an all-round artsy type” and has a degree in Fine Art and Education, but she always wanted to pursue music. She took private classical piano and music theory lessons as a child, and then sold some of her paintings to raise the money to buy a guitar. After working in music education in schools and winning an award for her music, script, illustration and story boards, Hills was able to set up her own studio, House in the Wood Productions. The music on both discs varies widely from calm and peaceful to lively and upbeat, from ambient and floating to melodic, from calm and peaceful to rhythmic and driving. It is truly a sampling of many aspects of Hills’ creative spirit, all performed by herself on keyboards and synthesizers. Her interest in composing music for films is readily apparent in the visual and colorful qualities in much of her music. Influences from her Celtic heritage also permeate her music from time to time. Some of the tracks also contain nature sounds

Disc 1 is titled Moon. It opens with “Desert: Midnight Ride,” a light, carefree piece that moves along at a casual and leisurely tempo - a great beginning! “Hidden Depths” is darker and more ambient with a driving rhythm. “Landfill Tango” is a delight. Some of the instrumentation is downright bizarre, which is what makes it so much fun. “Galaxies” is pure space music with vast darkness and openness occasionally punctuated with bright flashes of light. “Moon on the Moat” is gorgeous, describing a scene of perfect tranquility. More piano-based than most of the other tracks, I really love this one! “Winter River” is so effective that it sends a chill. The scene it paints is peaceful and quiet, but bitterly cold. “Woods After Rain” is again very visual, describing a scene where various animals, birds, and insects emerge from their hiding places to enjoy the freshness of the woods after the rain - beautiful! The joyful “Pebbles” is another favorite with its playful, tropical rhythm and wordless vocals.

Disc 2 is titled Shadows and begins with “Walk Into the Fallow Meadow,” a buoyant piece that is kept earth-bound by poignant strings - a very interesting contrast! “Caverns” is very dark and much more ambient, describing a place that is mysterious and sometimes ominous - the dark unknown - a favorite. “Kingdom of the Swan” glides gracefully and peacefully. “Suburban Dawn” has a strong semi-funky rhythm that drives it. The other instrumentation is minimal, but this piece is really fun and catchy! “Dark and Sleepy Forest” is mysterious, but this time in a more playful way. “Snowflakes” dances lightly and gently. “Return of the Butterflies” is another favorite. Hills describes the fluttering of hundreds, if not thousands, of butterfly wings, filling the sky with movement and color.

Moon and Shadows is a very impressive collection and should launch Barbara Hills and her music into the broad field of contemporary instrumental music. It is available from Amazon, iTunes, CD Baby, and many other music outlets. Recommended!
October 20, 2015
Barbara's Website Barbara's Artist Page on MainlyPiano
Album Links
Amazon (referral)iTunes
This site contains affiliate links to products. We may receive a commission for purchases made through these links.
More reviews of Barbara Hills albums 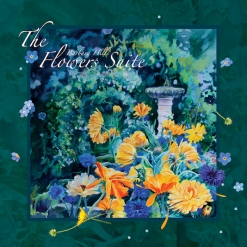