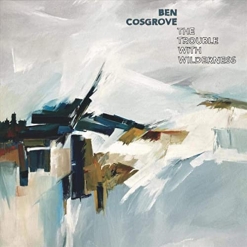 Ben's Website Ben's Artist Page on MainlyPiano
Album Links
Amazon (referral)Apple/iTunesSpotify
This site contains affiliate links to products. We may receive a commission for purchases made through these links.
The Trouble With Wilderness
Ben Cosgrove
2021 / Forward Fall Records
46 minutes
Review by Kathy Parsons
One of the things I love best about reviewing music is having recordings and artists come my way that I probably would have never found otherwise. Ben Cosgrove's The Trouble With Wilderness is one such genre-defying album and the more I listen to it (at least a dozen times so far!), the more deeply I appreciate - and enjoy - it! The twelve tracks on the album are all originals, and Cosgrove plays an assortment of grand and upright pianos (often felted), a variety of keyboards and synths, accordion, acoustic and electric guitars, upright bass, banjo, drums and "various percussion things." In a nutshell, I would call The Trouble With Wilderness a musical work of art - especially for those who are a bit more musically adventurous.

Still in his early 30's, Ben Cosgrove has performed solo in 48 states. His career so far has included artist residencies and collaborations with Acadia and Isle Royale National Parks, White Mountain Nation Forest, the Schmidt Ocean Institute, the Sitka Center for Art and Ecology and others. The Trouble With Wilderness is his seventh album. Much of his previous music has been centered around national parks, oceans and wilderness areas, and Cosgrove came to the realization that he wasn't focusing enough on the places that people are more likely to encounter in their everyday lives. He set out to write a set of pieces that would correct that oversight - a decision that was oddly well-timed. At about the time he started writing and recording demos for the project, the COVID-19 pandemic took hold and forced people (including Cosgrove) to stay much closer to home. "It really made me kind of have to walk the walk, in terms of the ideas I was trying to illustrate with this new music. ... I was going on these daylong rambles all over the outskirts of town pretty much every day for months. I was amazed by what strange, beautiful, and interesting things I noticed as I found myself looking more and more closely at all the same ordinary-seeming places that I passed again and again."

The album begins with "The Machine In the Garden," a favorite and the first single from the album. Rhythmic and upbeat, piano (felted), guitar and catchy percussion sounds are some of the primary instrumentation, but not all of it. This one grabbed my attention right away and still does. "Anorak" has a simple (unfelted) piano melody that floats above a flurry of accompanying notes. Dark, flowing and intense, I really like this one, too! I don't think I've ever seen or heard a piece about an "Overpass," but this one is great! A light-hearted toe-tapper, felted piano, guitar, keyboard effects, bass and percussion create an expressive energy and a desire to get up and get moving. "Oklahoma Wind Speed Measurement Club" is another interesting title, and this piece is more atmospheric and ambient than some of the others - a bit like some of Ludovico Einaudi's recent work. On "Wilder," layers of piano, keyboard, and ambient effects combine to create a sound that is "mechanical, organic and ethereal all at once." "Hadley" begins as an expressive piano solo with a melancholy, reflective feeling. About halfway into the piece, more layers of instrumentation are added in places, but it is still mostly a beautiful piano solo. "Meltwater" is also mostly solo piano with some added instrumentation here and there, capturing the power and energy of flowing water. Love it! The last track on the album has an interesting story. Titled "Templates For Limitless Fields Of Grass," it's an almost 10 1/2 minute piano solo. Based on a repeated modular idea with small alterations, the piece was inspired by an art project by the same name by Gary Kachadourian that is made up of a small series of richly-detailed pen-and-ink drawings of grass blades. Viewers are invited to photocopy the images hundreds of times and paste them to walls to create a kind of artificial wilderness.

The Trouble With Wilderness is fascinating from the first note to the last and I look forward to exploring more of Ben Cosgrove's music! The album is available on CD and vinyl from bencosgrove.com, for download from Amazon and Apple Music/iTunes, and from streaming sites like Spotify.

May 4, 2021
This review has been tagged as:
Latest Reviews
Ben's Website Ben's Artist Page on MainlyPiano
Album Links
Amazon (referral)Apple/iTunesSpotify
This site contains affiliate links to products. We may receive a commission for purchases made through these links.