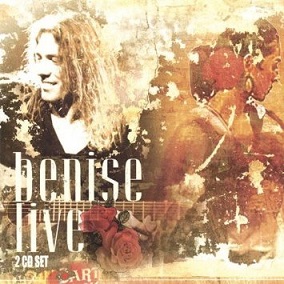 Benise's Website Benise's Artist Page on MainlyPiano
Album Links
Amazon
This site contains affiliate links to products. We may receive a commission for purchases made through these links.
Benise Live
Benise
2004 / Rosanegra Music
2 discs
Review by Michael Debbage
Apparently, Benise is generating some buzz in certain musical circles and with five studio albums under their belt so it appeared that a compilation of some sort was in order. Instead of the obligatory "best of" to rehash the past, Benise released a limited edition double live album and what a firecracker she is. Encapsulating their live show, Benise' main architect is Ron Benise on his guitar who prudently surrounds himself with a cast of band members that still make this very much a group effort.

My original introduction to this band was a live exposure on a sunny day in Southern California walking around Downtown Disney and I was immediately impressed with the band. Though on a grander scale, this venture also features a very enthusiastic band that pulls from the energy of the fervent crowd. Despite the lack of a major label backing Benise continues to produce a very high quality product. Okay, so the CD booklet is a one pager with "bootleg" imprinted upon it but certainly the production quality avoids any dodgy bootleg status. In fact, disc one is the soundtrack to the high quality Viva Spanish Nights DVD. With the exception of a mastering problem while transitioning from the introduction track to the opening song "Shakara" this would probably be the only technological glitch that I noted. This is far from a bootleg status.

So what about "Shakara"? Well, it immediately captives the audience with a fine battle between Ron Benise on guitar and Jim Sitterly on violin. Add the dynamic dual of C.G. Ryche on percussion and Carlos Lopez on drums and you know that you are in store for a great overview of Benise up close and personal. Speaking of percussion scuffles check out the almost carnival party atmosphere of "Tribal". If this fiesta does not move you then perhaps it is time for your annual physical. And if you really want to fully appreciate this work out check out the visual version on the DVD Viva Spanish Nights.

But this album is not just about having a carnival. Explore the more restrained folksy "Mediterranea", which oozes of romance via its simplicity. Clocking in over seven minutes it embodies both the reflective and carnival aspect of the band starting off in a strolling capacity contrasted with the double time conclusion. Equally as effective is the gorgeous "Santa Barbara" taken from the Mediterranea album that I previously reviewed.

As for disc two, the party continues courtesy for the thumping "Tabu" where once again Ron Benise exhibits his ferocious yet passionate guitar technique. Meanwhile Sitterly utterly sizzles and does well to keep up with Ron. The festivities continue with the vivacious "Carnaval" which also includes the participation of the crowd who accompany the band with their whistles as a result of Benise's beckoning. Clocking in over 8 minutes it is an utter revelry for both the band and the crowd. However, just like disc one Benise keeps us guessing with the dreamier "Brazil", which includes some vocal chanting from a female singer. Equally as wistful is the soulful "Brazilian Summer". Just who is playing that conservative piano solo? Meanwhile, if you want to hear the entire band in full action fast-forward to "Galletto's Jam" that is a true aerobic workout. As impressive is the concluding "Fandango" closing the album out on a partially military explosive high. Ron Benise is all over his guitar bringing the crowd to their enthusiastic feet.

Granted I have seen these guys perform live at Downtown Disney in a stripped down unplugged sort of way and was impressed then. While the DVD Viva Spanish Nights and Benise Live helps share the dynamics of a full-scale concert I am sure it does not replace the real thing. Nevertheless, Benise Live does an exceptional job of harnessing the energetic performances of the band. For those of you not yet familiar with Benise this is a great place to start.
December 23, 2004
This review has been tagged as:
Michael's Favorites: 2004
Benise's Website Benise's Artist Page on MainlyPiano
Album Links
Amazon
This site contains affiliate links to products. We may receive a commission for purchases made through these links.