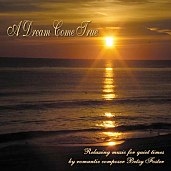 Betsy's Website Betsy's Artist Page on MainlyPiano
Album Links
Amazon (referral)
This site contains affiliate links to products. We may receive a commission for purchases made through these links.
A Dream Come True
Betsy Foster
2003 / Betsy Foster
55 minutes
Review by Kathy Parsons
A Dream Come True is an eclectic album that showcases a variety of Betsy Foster’s composing styles. From love ballads to piano pieces to sweeping soundtracks, she feels equally at home in many genres. One of the things that I found interesting about the layout of the CD is that it begins with five instrumental pieces that are primarily piano and would probably be filed under “new age,” followed by five vocals that are in a more pop style, and then five much bigger orchestrations. What ties the styles together is the sincerity and honesty of the music, as well as the deeply-felt emotions. Personally, I like the first five tracks the best, but the whole album is fascinating and engaging, and it’s fun to experience such a variety of music on one album. Catherine Styron plays piano and synth on all but two tracks, where Gene Rabbai takes over on the bench. Vocals are performed by Heather Blair Jones and Brian Glenn. Most of the other instrumentation is on acoustic instruments, so this CD has a very full, rich sound.

“Mark’s Song” opens the CD with a soulful piece composed after the death of Princess Diana, and later named for Betsy Foster’s husband. Oboe and violins combine with the piano to make this an exceptionally poignant piece. “The Christmas Waltz” is light and charming - it is easy to picture bundled up couples ice skating on a frozen lake or pond to this piece. I like the mysterious quality of “Music Box, a duet for flute and piano. “Make A Joyful Noise” starts out as a simple “song without words,” but builds into a full orchestration full of happiness and optimism. The five vocals are very well done and enjoyable, but I prefer the instrumentals. I do like “Chances” a lot - the lyrics are kind of different, and Heather Blair Jones makes them very personal. The instrumental version of “Loving You” is very gentle and sweet, with kind of a country feel to it. “Longing” has the sweep of a powerful soundtrack and packs an emotional wallop - what a beauty! “Hope” starts out big and becomes a gorgeous piano piece with accompaniment by a rich variety of instruments, becoming bigger again as the piece develops. “The Highlands” is another departure, with a Celtic feel and expansive style - haunting and lyrical.

A Dream Come True is a most impressive debut, and gives us a fascinating sampling of what Betsy Foster is capable of as a composer. I’m sure we’ll be hearing a lot more from her in the future! It is available at betsyfoster.com (lots of sound samples!), cdbaby.com, and amazon.com.
October 25, 2004
This review has been tagged as:
Debut Albums
Betsy's Website Betsy's Artist Page on MainlyPiano
Album Links
Amazon (referral)
This site contains affiliate links to products. We may receive a commission for purchases made through these links.