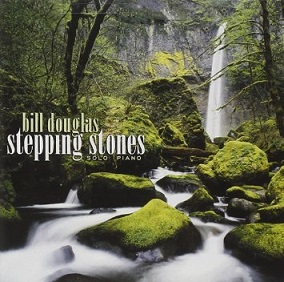 Bill's Website Bill's Artist Page on MainlyPiano
Album Links
Amazon
This site contains affiliate links to products. We may receive a commission for purchases made through these links.
Stepping Stones
Bill Douglas
2004 / Valley
Review by Michael Debbage
Equivalent in its emotive tone to that of Tim Janis, in contrast to strings, Bill Douglas' indelible stamp has been his choir arrangements courtesy of the Ars Nova singers. Unfortunately, I am not a huge fan of choral arrangements and I have had a notorious time being able to enjoy the beautiful music that Bill Douglas is capable of creating. That is until now as the artist presents his listeners with this pastoral solo piano project that is delicate and exquisite.

A native of Canada, Douglas began playing the piano at the age of four but it was not until he was thirteen that he began to take his pastime seriously. He also became adept at playing the bassoon. By the mid '70s, Douglas was active in composing and recorded three albums for RCA. Meanwhile, the early '90s saw the artist settle down with his current recording label, Hearts Of Space, and most recently he has been collaborating with the Ars Nova Singers.

So I was delighted when I found out that he wanted to share with the listening public this stark yet gorgeous solo piano project with only the frills of his memorable melodies. There are a total of 15 tracks, all self-composed with the exception of "Fool On The Hill/Julia" written by Lennon and McCartney. Not being a fan of cover tunes I was truly impressed with Douglas' rendition. Perhaps largely due to the fact that he integrated the songs seamlessly making for a delightful melody in its own right.

However, this album is not about Bill Douglas' interpretations of other artists but an inside look into the very heart of this expressive and uplifting artist. The first portion of the album appears to focus on more upbeat themes. Some of the more immediately memorable tracks are the flittering "Leap" or the utterly hauntingly beautiful "In Lovely Blue". Skip forward and you will find the smooth yet meandering "Riverrun." And it is all just Douglas and his piano that makes full use of the entire keyboard swaying back and forth.

By track 9, Douglas slows the tempo down significantly with the very somber and reflective "Home." And overall that is where the theme remains. Though there is also the very visually paced "She Walks In Beauty" with the chords allowing me to envision a confident woman walking a slow march with grace and utter confidence. Then the album closes with "Lullaby" that speaks for itself. As his label would put it "slow music for fast times".

Whether he uses classical, jazz or the occasional pop influence, Bill Douglas writes with utter confidence and style. The best way for me to conclude this review is by using the words of the artist himself. Partially quoting him from his official website Bill Douglas stated that his "...basic philosophy of music is that it can be helpful to the world. It can evoke such positive emotions as compassion, tenderness, strength, nobility...and joy." There is no doubt that Stepping Stones does all that and more.
December 9, 2004
This review has been tagged as:
Michael's Favorites: 2004
Bill's Website Bill's Artist Page on MainlyPiano
Album Links
Amazon
This site contains affiliate links to products. We may receive a commission for purchases made through these links.