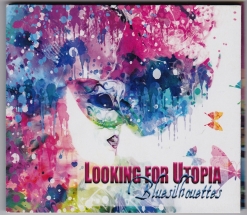 David's Website David's Artist Page on MainlyPiano
Album Links
Amazon (referral)iTunes
This site contains affiliate links to products. We may receive a commission for purchases made through these links.
Looking For Utopia
Bluesilhouettes (David R. Peoples)
2019 / Bluesilhouettes Music
64 minutes
Review by Kathy Parsons
Looking For Utopia is the debut album by Bluesilhouettes, but it isn’t the first album by David R. Peoples, the artist/composer who is Bluesilhouettes. Peoples has composed and recorded in a broad range of music genres that include classical, experimental and jazz. Looking For Utopia moves in a different, “more commercial” direction for the self-proclaimed “stuffy academic.” Although it includes elements of jazz, new age and world music stylings, I wouldn’t call this album “mainstream.” Bright, complex and sometimes a bit edgy, this is music that will take more than one cursory listen to “get” - and hurray for that! Looking For Utopia expresses the idea that achieving a goal may not be nearly as satisfying as discovering the treasures along the way. Guest artists include South African slide flutist Carina Bruwer and German cellist Natasha Jaffe. After the tracks were recorded in Atlanta, the digital files were sent to these artists to record their parts in their home countries. Abnmusic3 adds vibes and Jwnaugle plays drums. All of the music was composed and recorded by David Peoples.

An Adjunct Professor of Music at the University of North Georgia, Dr. Peoples wrote his first award-winning composition for symphonic orchestra by the time he was 15 and has since performed in piano concerts all over the world. He also plays and performs on horn, percussion and vocals. Peoples has won numerous national and international awards for composition and has had his music premiered throughout North and Central America, Europe and Asia. He has also written several books that include poetry and music instruction.

Looking For Utopia begins with “The Valley of Hidden Treasures,” a soaring trio for piano, flute and cello (plus drums in the second half of the piece). Sometimes serene and sometimes very powerful, it’s a strong indicator that this isn’t ear candy or fluff music. “Peach Blossom Spring” is much jazzier and more upbeat with a catchy rhythm and lots of great solo piano! Percussion, drums, Indian tanpura, sitar, and Peoples playing the inside the piano for a dulcimer effect add an interesting diversity of instrumentation to the mix. “Moondreams of Crystal Roses” features electronic ambience as well as layered flutes that paint a picture of an exquisite but fragile landscape. “Dance of the Flickering Fire” is percussive and rhythmic mixed with the “dancing” vibes and piano. More ambient than melodic, I really like this one! The title track begins as a quiet piano solo, gradually building and then quieting again. Near the middle of the piece, it becomes much darker and more ambient with electronic sounds deepening the musical tones until they become chaotic and fade out. The subdued solo piano returns for a short interlude before the mysterious but calmer instrumentation returns. Much of “Crystal Skies” is a duet for cello and vibes - not a common combination, but a very interesting one! Piano and percussion also grace this lovely piece - another favorite. “Glass Flower City” has a slightly Asian sound and is primarily a duet for piano and cello. Slow, open and very soulful, the cello is almost mournful at times. The powerful middle section brings in percussion as well, and then finishes with just piano and cello. “Glass Butterflies” is a magical flute and heavily processed piano piece. Electronic effects are added and Peoples plays the inside of the piano to create a dulcimer effect. The combination evokes all kinds of colorful images as the butterflies sparkle and flutter their wings. “Take Me To Elysian Fields” brings this fascinating album to a close, perhaps poised to begin a new journey?

Looking For Utopia is available from BlueSilhouettes.com, Amazon and iTunes.

December 27, 2018
This review has been tagged as:
Debut AlbumsKathy's Favorites: 2018Kathy's Picks
David's Website David's Artist Page on MainlyPiano
Album Links
Amazon (referral)iTunes
This site contains affiliate links to products. We may receive a commission for purchases made through these links.