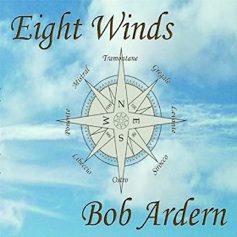 Bob's Website Bob's Artist Page on MainlyPiano
Album Links
Amazon (referral)iTunes
This site contains affiliate links to products. We may receive a commission for purchases made through these links.
Eight Winds
Bob Ardern
2015 / Bob Ardern
52 minutes
Review by Kathy Parsons
Eight Winds is the third release from Canadian finger-style guitarist Bob Ardern. Although I have thoroughly enjoyed the all three of his albums, Eight Winds is my favorite (so far!). All twelve tracks are original compositions, and three are guitar duets played and co-written with Ardern’s longtime friend Duncan Woodcock. Additional instrumentation is spare, but brings out the very best in the music and lets the guitars (and guitarists) shine in the spotlight. The overall feel of the album is very warm, genuine, and relaxed, although several of the pieces have a wonderful energy. The music is simple enough to provide easy-going background music, but it is also complex and interesting enough to listen to with full attention (and enjoyment) many, many times. A variety of influences are heard in Ardern’s music, blended together to create a unique musical voice that is rich and very satisfying.

Eight Winds begins with “Zephyr,” a piece that immediately grabbed my attention. It features Ardern on 12-string guitar and producer David Findlay on bass and piano. Upbeat and light-hearted, it gives the album a buoyant start. “Matilda’s Dance” features Ardern on six-string guitar and Findlay on bass and accordion. This one feels a bit more like a folk song with a ballad-style melody that tells an interesting tale of your own choosing. “Crusaders and Jesters” is the first of the duets. Originally written in 1973, it was the first piece the two guitarists wrote together. Both play six-string guitars and create the kind of musical magic that can happen when kindred spirits play together. “Cascading” is a gently rhythmic and spirited piece that has Findlay adding colorful touches with piano, bass, percussion, cello, and synthesizer - wow! how’d he do dat??? There are two versions of “50 Not Out” - a duet for two six-string guitars and the closing track that features the “full band.” Although it is a cricketing term, the title relates to how long the two friends have known each other. The quiet energy of this piece expresses the joy of making music. “Another Time Maybe” is upbeat with a slightly bittersweet flavor. “Three Years On” is the third duet, but is actually a trio with Findlay adding bass, percussion, and glockenspiel to the guitars. Gently rhythmic and a little bit melancholy, it’s a favorite. I also really like the much darker “Matushka,” which has Ardern on guitar and bouzouki and Findlay on bass, cello, and percussion. Mysterious and poignant, it’s a beauty! The ending version of “50 Not Out” adds bass, piano, and percussion to the two guitars, upping the energy level and leaving us with a great big grin.

Eight Winds is a delight from the first note to the last and I highly recommend it! It is available from Amazon, iTunes and CD Baby.
October 4, 2015
This review has been tagged as:
Guitar musicZMR Winner
Bob's Website Bob's Artist Page on MainlyPiano
Album Links
Amazon (referral)iTunes
This site contains affiliate links to products. We may receive a commission for purchases made through these links.
More reviews of Bob Ardern albums 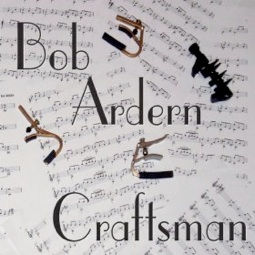 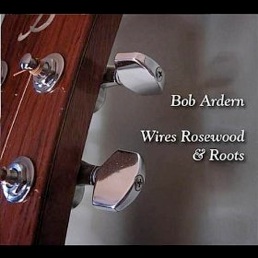