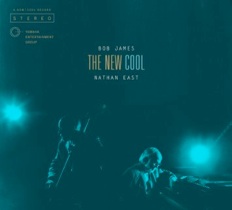 Bob's Website Bob's Artist Page on MainlyPiano Nathan's Website Nathan's Artist Page on MainlyPiano
Album Links
Amazon (referral)iTunes
This site contains affiliate links to products. We may receive a commission for purchases made through these links.
The New Cool
Bob James and Nathan East
2015 / Yamaha Entertainment
54 minutes
Review by Michael Debbage
Most jazz enthusiasts should be very familiar with not only the legendary jazz pianist Bob James but also the in demand session bass player Nathan East. While James is best known mainstream wise for his song “Angela” that was the introduction to the famous late seventies comedy “Taxi”, Nathan East is probably one of the music industries’ most in demand bass players that you will scroll forever on his website and lose count of which artists he has played with. That said, James and East are very familiar with each other as they have extensively collaborated in the contemporary jazz super group Fourplay that you have to begin to wonder if that particular group was simply musical foreplay to this intriguing duet.

Needless to say The New Cool leans less to the contemporary nature of the band they are currently featured in with inclinations more to an underlying improvisational feel to it with East predominantly featured on a stand up acoustic bass. Despite some embellishments from the Nashville Recording Orchestra along with the clean production of the two artists along with the assistance of Chris Gero and Bryan Lennox, The New Cool has a more stripped down superstar lounge feel to it.

While the album focuses on the super smooth musical interludes and interactions of James and East for the most part, the core of the album decides to focus on a Willie Nelson composition “Crazy” that features the attractive yet reserved vocals of Vince Gill. Equally as impressive is the breezy Brazilian jazz influenced composition “Canto Y La Danza” that also features Rafael Padilla on percussion and Scott Williamson on drums. It is here that we hear East on the electric bass otherwise he is predominantly featured on the stand up acoustic bass.

Needless to say Bob James has been around forever and Nathan East in even a shorter period of time has established himself as the go to bass player for multiple genres. While Bob James has his own solo career that many musicians would die for, it is his collaborations from Earl Klugh to David Sanborn to now Nathan East that overtly impresses the jazz community. The New Cool only adds to that credence accepting the fact that Bob James’s associations sometimes outweigh his own solo creativity.
October 25, 2015
This review has been tagged as:
JazzMichael's Favorites: 2015
Bob's Website Bob's Artist Page on MainlyPiano Nathan's Website Nathan's Artist Page on MainlyPiano
Album Links
Amazon (referral)iTunes
This site contains affiliate links to products. We may receive a commission for purchases made through these links.