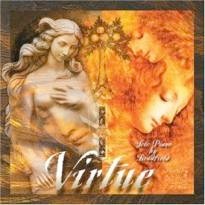 Bradfield's Website Bradfield's Artist Page on MainlyPiano
Album Links
Amazon (referral)iTunes
This site contains affiliate links to products. We may receive a commission for purchases made through these links.
Virtue
Bradfield
2000 / APSIS Music
51 minutes
Review by Kathy Parsons
Virtue is a fascinating concept album of piano solos based on thirteen virtues. Bradfield defines “virtue” as “a consistent inclination to voluntarily achieve moral excellence.” Along with the music, the liner notes give a full explanation of each virtue, allowing the listener to read and understand the idea behind each piece. Classically trained in Canada from a very early age, Bradfield was sometimes reprimanded for being too creative with the classics, so he began composing his own music. Virtue, his second release, showcases Bradfield’s free spirit as well as his discipline and training. His playing is expressive and full of emotion, making this a very satisfying recording to listen to repeatedly. Many of the pieces open up and reveal themselves with each listening, allowing the listener to achieve a deeper understanding of the music.

All of the tracks are interesting in their own right, and make a wonderful collection as a whole. I do have some favorites, though. “Sincerity” tops the list with its elegant flow and bittersweet melody - I really like the “sincerity” of this piece and the way if comes from the composer’s heart to touch the listener’s heart. “Fidelity” is quietly introspective and has a reflective feeling that is gentle and honest. “Joyfulness” is carefree and innocent, reflecting the joyfulness of a child - something most of us lose as we get older. “Courage” is another real favorite. Much darker in tone, it tells of conquering fear and how the mind can wreak more havoc than the reality of a situation. This is a strong and powerful piece that is both emotional and thought-provoking. “Forgiveness” is melancholy and yet full of hope - deeply thoughtful and poignant. “Vigilance” is a bit more abstract and rubato, describing persevering and “pushing the envelope,” and yet remaining calm and focused. Other titles include “Patience,” “Humility,” “Initiative,” “Selflessness,” and “Wisdom.”

Virtue is a great album for those who like a bit of spirituality and enlightenment to go with their music. It is available from bradfield.ca and amazon.com.

November 21, 2004
Bradfield's Website Bradfield's Artist Page on MainlyPiano
Album Links
Amazon (referral)iTunes
This site contains affiliate links to products. We may receive a commission for purchases made through these links.
More reviews of Bradfield albums 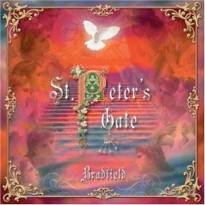