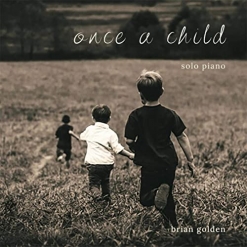 Brian's Website Brian's Artist Page on MainlyPiano
Album Links
Amazon (referral)iTunes
This site contains affiliate links to products. We may receive a commission for purchases made through these links.
Once a Child
Brian Golden
2020 / Parabola Music Productions
50 minutes
Review by Kathy Parsons
Once a Child is a beautifully soothing solo piano album by Brian Golden, an artist who has released several piano albums but is new to my ears - I like!!! The ten original pieces reflect on “love, loss, questions, reflection, introspection, nostalgia and walking in faith.” Classically-trained from a very young age, but influenced by a wide variety of musical styles and genres, Golden has developed his own unique musical voice. He lists J.S. Bach, Frederic Chopin, George Gershwin, Bela Bartok, Glenn Gould, Keith Jarrett, Hoagy Carmichael, Scott Joplin and The Beatles as some of his strongest influences, but there are many others as well. In addition to his piano albums, Golden has written music for dance and film and produces “Little Ballets for Dance and Play” with his wife Christy, a classically-trained dancer and illustrator. Their album, Fairy Light: Ballets For Children (2015), received a "Parents' Choice Award." Golden is also the Music Composition Coordinator and Instructor of Piano and Music Composition at Colorado Academy in Denver, where he has taught since 2000.

Once a Child begins with “Song for a Ballerina,” a gentle piece tinged with melancholy and reflective of the graceful movements of a solo dancer, possibly in a room by herself. As its title implies, “Simplicity” is uncomplicated yet seems to be almost a soliloquy, allowing inner thoughts and emotions to freely express themselves at the piano. “Air on the Heartstring” has a strong Baroque influence (with hints of JS Bach) yet remains in the present. The very poignant “Shallow Water” is a favorite. Deep emotion runs through every note of this piece’s gentle flowing rhythms and heartfelt melody. At almost 8 1/2 minutes, it leisurely tells its sad and touching story. “Prelude 22” has a rather stately style in some passages while others are somewhat freer and more expressive - another favorite. The title track feels very introspective and nostalgic - memories set to music. Golden adds variety to the simple melody with occasional flourishes with a jazzier improvised feeling - I really like this one, too! Still, I think “Ennie” is my favorite piece on the album. I love the rolling broken-chord flow of the left hand and the tender, wistful melody. “No Answers” seems deep in thought, letting emotions freely come to the surface and express themselves on the piano while trying to find a peaceful resolve within. It’s a beautiful close to a very beautiful album.

I need to go back and hear what I’ve been missing in Brian Golden’s earlier music! Once a Child is available from Amazon and iTunes as well as several of the streaming sites. Check it out!
May 3, 2020
This review has been tagged as:
Kathy's PicksLatest Reviews
Brian's Website Brian's Artist Page on MainlyPiano
Album Links
Amazon (referral)iTunes
This site contains affiliate links to products. We may receive a commission for purchases made through these links.