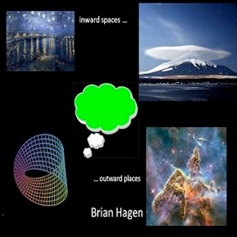 Brian's Website Brian's Artist Page on MainlyPiano
Album Links
Amazon (referral)iTunes
This site contains affiliate links to products. We may receive a commission for purchases made through these links.
Inward Spaces... Outward Places
Brian Hagen
2014 / BH Arts
43 minutes
Review by Kathy Parsons
Inward Spaces... Outward Places is Brian Hagen’s first album of multi-instrumental pieces, composed and performed in a variety of styles. Six of the fourteen tracks are solo piano, three of which are also presented in ensemble arrangements where all of the instrumentation is performed by Hagen. If you are looking for a collection with a consistent style or mood throughout, this one won’t work, but I found the variety delightful in the car and while I was working at the computer. Most of the pieces have a smooth jazz vibe, but there is one classical piano solo by Muzio Clementi and a few pieces are more new age. It’s an excellent display of Hagen’s versatility and a composer and musician. Brian Hagen has been playing the piano since he was a very young child, was classically-trained, and studied classical music and jazz as music major in college. He has also been active in improvisational theater, creating the music as the plays were being invented.

Inward Spaces... Outward Places begins with the solo piano version of “Dizziness,” a warm and breezy piece that hints of Antonio Carlos Jobim - smooth and elegant with a gentle energy. It appears later as an ensemble arrangement that features guitar and keyboard. “I Never Knew Her” is a beautiful solo piano jazz ballad with a strong and very expressive melody. Muzio Clementi (1752-1832) composed a large volume of solo piano music that isn’t heard often enough. Hagen included his “Sonatina Op. 38, #2 (second movement)” on this album, and it fits right in. The ensemble version of “Quietly” is light and easy-going with a tropical feeling while the solo version is much softer and ends the album with a gentle sigh. “Distantly” is smooth jazz with a lyrical melody over a gently swaying rhythm. It appears as a piano solo and later as an upbeat ensemble. The energy gets kicked up several notches with the joyful and exuberant “Island Beach Party.” If your toes don’t get to tapping with this one, you’d better check your pulse! “Dreamwave” goes into a more new age direction with the sound of the ocean in the background and a slightly jazzy keyboard melody and rhythm. “Ascension” gets very ambient and “spacey.” “Starflight” has a bright, playful energy while suggesting twinkling stars and propulsive motion. I like this one almost as much as the piano solos! “Afternoon Waltz” is light, carefree and very happy - also a favorite. “Clara’s Song,” my favorite of the piano solos, is sometimes wistful and dreamy, sometimes bolder and more confident. I love the free, spontaneous feeling of this lovely piece.

Inward Spaces... Outward Places is an excellent introduction to Brian Hagen’s music! It is available from Amazon, iTunes, and CD Baby. Recommended!
March 12, 2016
Brian's Website Brian's Artist Page on MainlyPiano
Album Links
Amazon (referral)iTunes
This site contains affiliate links to products. We may receive a commission for purchases made through these links.
More reviews of Brian Hagen albums 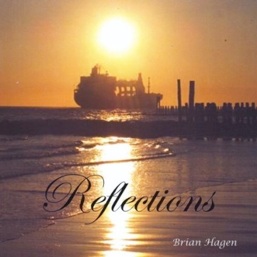 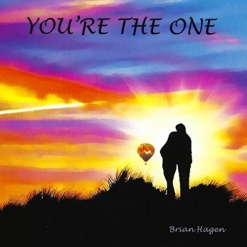 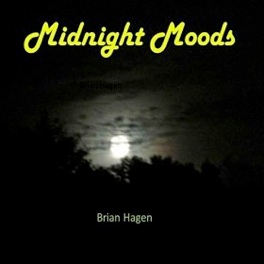