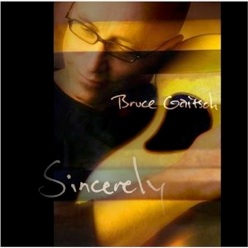 Bruce's Website Bruce's Artist Page on MainlyPiano
Album Links
Amazon (referral)iTunes
This site contains affiliate links to products. We may receive a commission for purchases made through these links.
Sincerely
Bruce Gaitsch
2006 / Autumn Records
34 minutes
Review by Michael Debbage
Bruce Gaitsch is a highly regarded session guitarist who has been associated with top musicians and groups such as Madonna, Chicago, Richard Marx and Philip Bailey just to name a few. This has not stopped Gaitsch from recording his own material since 1995. He has released several albums since then including collaborations with rock guitarist Tommy Denander and pianist Janey Clewer in more recent years. With an impressive discography, his latest solo album Sincerely is probably one of the most honest recordings heard in years.

Apparently guitar manufacturer Matt McPherson, who at the time owned a recording company, invited Gaitsch to record a solo album that would feature the McPherson guitars. Though Matt is credited as executive producer, the actual recording is produced by Bruce himself and the production is stylistic in its simplicity yet smooth and spacious. Needless to say the performances are equal to the stellar sound quality and feature some of Bruce’s best compositions to date.

While the center of attention is Gaitsch and the McPherson guitars, there is also a light showering of harmonica, flute and vocal enhancements with a little help from family and friends. Nevertheless, the album opens with the moving “Miss Sam” that focuses on Gaitsch’s optimistic and cheerful guitar work that sets the tone for the entire album. Similar results can be found from the contemplative “Mia’s Day” that also features the radiant light vocal enhancements from his wife Janey Clewer with a slight hint of the flute from Samantha Gaitsch. Bruce also shares the spotlight as he musically collaborates with Howard Levy on the harmonica courtesy of “Popcorn With Daisy” and even more so on “Swamp Thing” with its underlying zydeco influence. Nevertheless, the heart of Sincerely is the lush and fruitful work of Gaitsch’s terrific transcendental guitar work

From the album title to the song titles such as “Janey & I” along with “Mom & Dad”, it is very clear that this is a deeply personal recording. As a result, Sincerely reads like an open book, with its charm drawn from a warm and honest recording with Gaitsch wearing his music emotions on his guitar strings. If you have not introduced yourself to the severely overlooked solo work of Gaitsch, pick any album from his already impressive musical portfolio and you will not be disappointed. But without a shadow of a doubt, Sincerely is his finest achievement to date and one of the most heartfelt recordings heard in a long time.
February 9, 2013
This review has been tagged as:
Ageless FavoritesGuitar music
Bruce's Website Bruce's Artist Page on MainlyPiano
Album Links
Amazon (referral)iTunes
This site contains affiliate links to products. We may receive a commission for purchases made through these links.