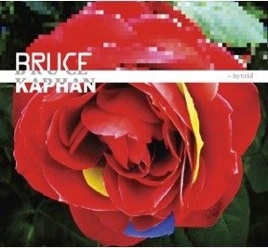 Hybrid Website Hybrid Artist Page on MainlyPiano
Album Links
Amazon (referral)iTunes
This site contains affiliate links to products. We may receive a commission for purchases made through these links.
Hybrid
Bruce Kaphan
2009 / Wiggling Air Records
51 minutes
Review by Kathy Parsons
It is always a treat to be exposed to a musician who is a master of his or her instrument. When that musician is also an innovative artist who puts his or her instrument into an unexpected context, the treat takes on an additional “wow!” factor. Traditionally, the pedal steel guitar has been a staple of country and Hawaiian music, but Bruce Kaphan has created a unique niche for the pedal steel via his original compositions and unconventional approach. On his 2000 debut CD Slider - Ambient Excursions for Pedal Steel Guitar, Kaphan played most of the music himself. On Hybrid, he includes a very impressive group of musicians on such diverse instruments as cello, ukulele, piano, fretless bass, tabla, congas, and strings. The music is also diverse, ranging from melodic to more conceptual and experimental work. The album as a whole is far from “business as usual,” but it is indeed a fascinating ride!

“Pohaka la” begins the album with a piece inspired by sunbeams poking through clouds in Hawaii. Ukulele and fretless bass join the pedal steel to paint a vivid but serene portrait of the experience. “Maya” is a piece for pedal steel and piano composed and performed by pianist Kent Darnielle. It’s a very unusual combination of instruments, but Kaphan and Darnielle make it work beautifully. “Gleaming Towers” brings in tabla and fretless bass along with atmospheric keyboard sounds to create one of the more ambient tracks - effortless and floating. “Senbazuru” has a fascinating history that I’ll try to condense. The guitar track was recorded by Tom Size in 1982. While taking a walk and reflecting on the anniversary of the bomb blast in Nagasaki, Kaphan started hearing this track in his head along with a pedal steel accompaniment which he raced home to record. Kaphan’s wife then named it “Senbazuru,” which is Japanese for 1000 origami cranes, a symbol of peace. “Okanagan Jubilee” was composed during a ski trip in Canada, and is written for pedal steel and string quartet - a very different sound, to be sure! “Dust Bowl Revisited” is very challenging, but given that the stimulus for writing it was the fear “that with the amount of carbon dioxide being dumped into the atmosphere, and the inability of human beings to get organized over anything other than finding new ways to kill each other (and any other species in their path), Bleakest House is on the horizon...” (quoted from notes on the music on Kaphan’s website), the discordance and feelings of chaos and confusion are absolutely right. “Silenzi” is a second piece composed for piano and pedal steel by Kent Darnielle. Quiet and thoughtful, it’s another beauty! “Renewal” is the first time Kaphan has recorded a solo pedal steel piece. The sound is lovely, and I hope this is the first of many solo pieces! “There But 4” ends this album a bit more traditionally with a happy, contented piece with a country flavor. Great stuff!

Hybrid provides an eclectic and very enjoyable assortment of musical experiences. Check it out at brucekaphan.com, Amazon, iTunes, CD Baby, and various independent music stores.
June 9, 2010
This review has been tagged as:
Guitar music
Hybrid Website Hybrid Artist Page on MainlyPiano
Album Links
Amazon (referral)iTunes
This site contains affiliate links to products. We may receive a commission for purchases made through these links.