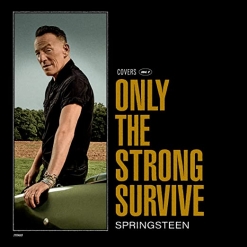 Bruce's Website Bruce's Artist Page on MainlyPiano
Album Links
Amazon (Vinyl & CD)Amazon (CD & Streaming)Apple/iTunesSpotify
This site contains affiliate links to products. We may receive a commission for purchases made through these links.
Only The Strong Survive
Bruce Springsteen
2022 / Columbia Records
50 minutes
Review by Steve Yip
Only The Strong Survive, Bruce Springsteen’s awaited tribute to SOUL music dropped on November 11, 2022 after several singles were released which whetted my appetite, and probably many, many others. See my preview on October 16, 2022 on MainlyPiano.com.

Quoting from the press release, “The album is ‘a collection of fifteen soul music greats,’ It "celebrates soul music gems from the legendary catalogues (sic) of Motown, Gamble and Huff, Stax and many more." As he is quoted from my MainlyPiano preview on October 16, 2022, Bruce said, “I found a theme I wanted to explore now I'd spent my working life with my voice at the surface ... But this time, I decided to do something I had never done before... Now of course, the music that led to this epiphany and gifted me this insight was Soul Music.” [Emphasis mine]

I found this collection a joyous celebration on par as Bruce has enthused in his pre-release video promotion. Now, Springsteen is in his early 70’s and he has mapped out a reputation of rolling out rollicking, infectious energy after so many years of holding forth in his marathon concerts. His voice remains strong and firm. Moving into “blue eye soul” territory? I don’t think so, though his performance and delivery are top notch. No doubt, this recording is a true tribute as he explores the ‘American Pop Songbook.’ In his announcement video prior to the album’s full release, Springsteen commented: "I wanted to make an album where I just sang. And my goal is for the modern audience to experience its beauty and joy, just as I have since I first heard it. I hope you love listening to it as much as I loved making it."

Springsteen’s voice retains its gravel quality and projection. And this is not an attempt to one-up these soul classics and slide into “blue eye soul” territory, though there is a lot of soul driving this album. A couple selections also features Sam Moore of Sam and Dave fame. Bruce’s coarse voiced delivery has matured in the years, and remains strong. I was surprised he had the confidence to take on selections such as “I Wish It Would Rain” (Temptations) and “Don’t Play That Song For Me” which was slightly mellower compared to Aretha’s 1970 slightly jazz-paced uptempo version.

He even delves into covering “What Becomes of the Brokenhearted” (Temptations) and finishing up with the Supremes’ “Someday We’ll Be Together.” Truth be told, it too was well delivered but I’m sure Bruce wouldn’t try to (or could) outdo the force in how Diana Ross and the Supremes made that song such a classic. One can say he loved to sing it.

I was really impressed by the opening of “The Sun Ain’t Gonna Shine Anymore”... I was immediately attracted to it and it reminded me possibly as a cover of a Righteous Brothers piece. It had that Phil Spector’ish feel and Bruce’s vocals had power. Come to find out, it was a cover of a song previously recorded by Frankie Vali, and also by the Walker Brothers! Great job on this one, Bruce. (And who are the Walker Brothers?)

So for those who enjoy Bruce Springsteen historically, and his various musical and social explorations of late (Woody Guthrie, Pete Seeger, and other American folk traditions), Only The Strong Survive is a nothing less than labor of love. It’s definitely a delightful joy in upholding and celebrating the enduring legacy of African American popular music of the Sixties and early Seventies. And yes, my positive assessments from my October 16 posting on MainlyPiano of the two initial singles (“Do I Love You ” and “Nightshift”) are unchanged. But allow me one last addendum in this relation, the pleasant xylophone opening of “Do I Love You (Yes I Do)” was reminiscent of Bruce’s opening of the crowd favorite, “Santa Is Coming To Town”! Happy holidays, y'all.

November 12, 2022
This review has been tagged as:
Latest Reviews
Bruce's Website Bruce's Artist Page on MainlyPiano
Album Links
Amazon (Vinyl & CD)Amazon (CD & Streaming)Apple/iTunesSpotify
This site contains affiliate links to products. We may receive a commission for purchases made through these links.