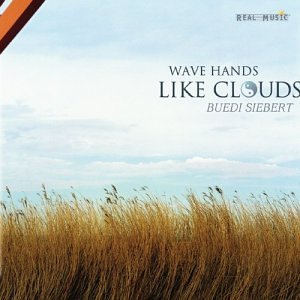 Büdi's Website Büdi's Artist Page on MainlyPiano
Album Links
Amazon
This site contains affiliate links to products. We may receive a commission for purchases made through these links.
Wave Hands Like Clouds
Büdi Siebert
2004 / Real Music
Review by Michael Debbage
Earlier this year, Buedi Siebert released the specialty CD Om Mani Padme Hum that was just too far to the left to feel right for me. Here it appears that the always-interesting Siebert is back on track with this slice of East meets West with a greater emphasis on the Land of the Rising Sun. Once again there are meditative qualities but it is delivered in a production and writing style that emphasizes spatial versus spiritual. As a result this album is as enjoyable as 2003's sleeper The Light Dance.

There is no doubting the commercial and meditative qualities that are both present on this CD. This is well reflected in the artwork that integrates elements of nature with the spiritual world. Yes, that is the Yin and Yang tucked away inconspicuously within the font of the album title. The spiritual tone is softened but is still ever present for those that are open to such philosophies.

This German musician is largely known for his work on the flute as well as several other woodwind instruments. However, the first portion of the album concentrates on the large Chinese zither that creates a plucked string sound so prominent in many musical genres of the Eastern culture. The instrumentation is very bare and stripped down, giving the listener much time to ponder and reflect. An exception to this rule is the song "Waterplay" that includes nominal embellishments of what sounds like a distant saxophone or clarinet. Buried in the mix the superfluities never distract from the naked feel of this album. "Building Chi" continues with this arrangement and progression but this time the flute master steps forward.

Speaking of the flute master, skip forward to the utterly serene "Temple On Green Mountain". I can almost imagine Siebert, the mellow Pied Piper, having a moment of solitude under the shade of a huge oak tree accompanied by the sweet chirping of a bird. And this moment is even further extended as the track merges into the 10-minute long "Song Of The Nightingale", only this time a very reserved zither accompanies the twittering. It certainly prompts me to want to cloud watch and bask in the lush outdoors and simply enjoy the scenery.

It appears that the album continues with the nature soundtrack accompaniment courtesy of the track "Into The Distance". Initially, there is a musical theme that fades about halfway through then the nightingale returns accompanied by a soft serene stream. Am I strolling through a sophisticated exotic Japanese garden? The music certainly transports me there ever so gently.

Needless to say Siebert scores again, though loyal fans should keep in mind that this is a reissue of Siebert's album Qi Gong that was released back in the mid 1990's. With that word of caution, those of you that did not find this nugget the first time around wave your hand and say yes please. Do not let this one slip by you a second time.
December 12, 2004
This review has been tagged as:
Michael's Favorites: 2004
Büdi's Website Büdi's Artist Page on MainlyPiano
Album Links
Amazon
This site contains affiliate links to products. We may receive a commission for purchases made through these links.