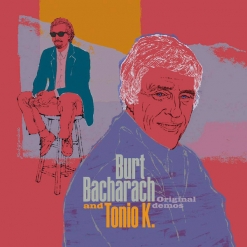 Burt's Website Burt's Artist Page on MainlyPiano Tonio's Website Tonio's Artist Page on MainlyPiano
Album Links
Contante & Sonante
This site contains affiliate links to products. We may receive a commission for purchases made through these links.
Original Demos
Burt Bacharach and Tonio K.
2017 / Contante & Sonante
60 minutes
Review by Michael Debbage
World renowned eternally young composer, songwriter, pianist Burt Bacharach has been around for decades and shows no evidence of slowing down. With a career that dates as far back as the mid to late 50’s, Bacharach’s career really surged when he began a long musical partnership with lyricist Hal David and the hits have been too many to discuss here. But in more recent decades Bacharach has collaborated with the more contemporary Elvis Costello and Ronald Isley. However, Original Demos represents his new songwriting partnership with the much underrated but critically acclaimed artist Tonio K, a partnership that began back in 1995.

So roll back the calendar over 20 years and Bacharach and Tonio start in complete sync with the wonderful “If I Should Love You” that Chicago would make their own on their recording Chicago XXVI Live. The particular “demo” found here is performed by the under the radar soulful vocals of Billy Valentine who is actually featured on 5 of the first 6 tracks. Check out the expressive “Where Does Love Go” with Bacharach on piano and David Foster’s saxophone player Dave Boruff only to be followed up by “Love’s Still The Answer”. The latter would also feature on the (Ronald) Isley Meets Bacharach 2003 collaboration. Are we sure these are just demos?

Original Demos also includes the moody groovy “Go Ask Shakespeare” that is inspired from the stalled attempt to collaborate with Dr Dre. While an actual album did not transpire with Dre it did result inspiring Bacharach to release the very contemporary At This Time in 2005. Also featured is the demo of “What Love Can Do” which is the sketching of a song that Bacharach and Tonio created with the Beach Boys’ Brian Wilson. The demo version here features John Pagano on vocals though his performance on the reflective ballad “It Was You” would be the preferred Pagano track.

Not even getting around to elaborating on the performances of Warren Wiebe and Bill Champlin, Contante & Sonante has once again pulled off the impossible with their latest in the Original Demos series. With the release limited to a 1000 numbered edition the series has essentially sold out. But if you are lucky run don’t walk to the label’s website and order it now.