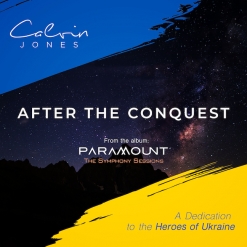 Calvin's Website Calvin's Artist Page on MainlyPiano
Album Links
YouTube VideoAmazon (referral)Apple/iTunesSpotify
This site contains affiliate links to products. We may receive a commission for purchases made through these links.
After the Conquest (single)
Calvin Jones
2022 / Personal Records
5 minutes
Review by Kathy Parsons
American composer/pianist Calvin Jones has released a powerful new single and music video, "After the Conquest," and has dedicated it to the many unsung heroes of the war in Ukraine. Bringing the story even closer to home, Calvin and his wife were awakened in their apartment in Kiev in February of this year by the sounds of loud sirens and bombs exploding all around them. They were able to escape Kiev and have been assisting other escapees as well as supporting many of the people left behind. Calvin and his wife have been working with individuals and organizations to are risking their lives to get supplies such as food, water and medications to those who need them. Quoting Calvin: "They are the reason we decided to dedicate the video of ‘After the Conquest’ to them. They are real heroes and have been mostly overlooked.”

The video features war footage by Oleksandr Sokilenko that was filmed mostly in and around Kiev. The destruction and devastation shown is both heartbreaking and terrifying, and I kept asking "Why?" as I viewed it several times. Bombed-out apartment buildings, office buildings, natural beauty, even a destroyed grand piano - all gone. So many homes and lives ruined - and for what? Calvin Jones' music is the perfect soundtrack to the film, which also features clips of his performance playing the piano with Lviv Virtuosos Orchestra in Lviv, Ukraine. Dark and despairing, the music is amazingly powerful, stirring feelings of heartbreak and utter defeat.

The music video is available on YouTube and needs to be seen by as many people as possible all over the world. The single is available to purchase and/or stream on many platforms, including Amazon and Spotify. Please share! Calvin Jones will be donating a portion of the proceeds to individuals and charitable organizations helping victims of the invasion.
August 7, 2022
This review has been tagged as:
Single Release
Calvin's Website Calvin's Artist Page on MainlyPiano
Album Links
YouTube VideoAmazon (referral)Apple/iTunesSpotify
This site contains affiliate links to products. We may receive a commission for purchases made through these links.
More reviews of Calvin Jones albums 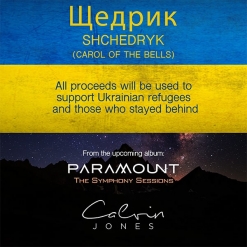