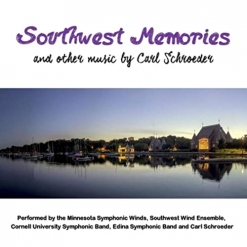 Carl's Website Carl's Artist Page on MainlyPiano
Album Links
Amazon (referral)iTunes
This site contains affiliate links to products. We may receive a commission for purchases made through these links.
Southwest Memories and Other Music By Carl Schroeder
Carl Schroeder
2019 / Carl Schroeder
59 minutes
Review by Kathy Parsons
I first reviewed Carl Schroeder’s music back in 2006 when he sent me his first solo piano album, 88 Keys - I loved it! At that point, Carl was 24 years old and 88 Keys was his fourth album. I hadn’t heard from Carl for a very long time, so I was delighted when he wrote and told me that he had a new album for review. Southwest Memories and Other Music By Carl Schroeder is an album of fourteen original compositions. The first five tracks are orchestral works performed by symphonic bands and ensembles from New York and Minnesota, and the other nine are piano solos performed by Schroeder. The music was composed over the period of 2004-2019 and is classical in style and structure, but is very much in the present.

Located in Minneapolis, Minnesota, Carl Schroeder composes music for concert band, orchestra, choir, chamber ensemble and solo piano. His music is often inspired by American history and current events as well as by natural surroundings and memories. His large-ensemble music has been performed by more than forty concert bands, orchestras and choirs including the Air Force Band of Mid-America, Minnesota Youth Symphonies and Ukraine's Chamber Choir Kyiv. A graduate of St. Olaf College, Schroeder has received an impressive number of awards and honors for his music.

Southwest Memories and Other Music By Carl Schroeder begins with “The Willing,” which was composed in honor of United States military personnel and performed by the Cornell University Symphonic Band. Strong and majestic while expressing respect and gratitude, it’s an epic work. “Southwest Memories” was performed by Southwest Wind Ensemble and was commissioned for the celebration of the 75th anniversary of Southwest High School. A wide array of emotions - from delicate grace to power and excitement - are expressed in the music, telling many stories in its 8 1/2 minutes. “Remembrance” was commissioned to honor the many people who served in the Civil War and was recorded by the Minnesota Symphonic Winds. The same group also recorded “Spin,” which was inspired by the family biking trips of Schroeder’s childhood. Fun and excitement abound!

The piano solos are, of course, my favorites on the album. The beautiful and melodic “Presence” and “From This Day Forward” were composed for weddings and both express joy, happiness and love. “A Celestial Triptych” is a three-movement work inspired by “Space Odyssey,” a series of space landscape paintings by Kendall Bohn that are pictured on the back of the liner notes for the CD. Darker, edgier and more experimental, it’s a fascinating suite that I’m looking forward to playing myself! “In Memory” and “Memorial” were composed for Schroeder’s grandfather and great aunt. Both pieces paint loving portraits that honor the people they were and the lives they lived. At almost eleven minutes, “The Adventures of Zorro Anderson” tells a very colorful story that was inspired by the novel The Fenn and Zorro Letters by Mari Kempton and Carl Schroder. I need to find that book!

Southwest Memories and Other Music By Carl Schroeder is definitely not music that will induce sleep or work well for massage, but it is music you can really sink your teeth into and you will hear something new each time you listen to it. The album is available from Amazon, iTunes, and Spotify as well as CarlSchroeder.com. Sheet music for some of the piano solos and ensemble works are also available from Schroeder’s website.

May 13, 2020
This review has been tagged as:
Kathy's PicksLatest ReviewsModern Classical
Carl's Website Carl's Artist Page on MainlyPiano
Album Links
Amazon (referral)iTunes
This site contains affiliate links to products. We may receive a commission for purchases made through these links.
More reviews of Carl Schroeder albums 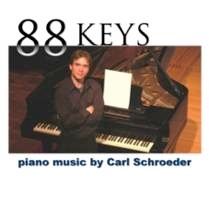