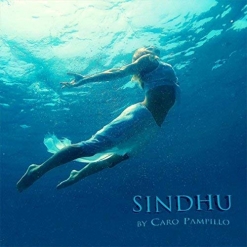 Caro's Website Caro's Artist Page on MainlyPiano
Album Links
Amazon (referral)iTunes
This site contains affiliate links to products. We may receive a commission for purchases made through these links.
Sindhu
Caro Pampillo
2018 / Caro Pampillo
68 minutes
Review by Kathy Parsons
Sindhu is the first full-length album from Caro Pampillo, a singer/ songwriter/ actress who was born in Venezuela and grew up in Argentina. The title is Sanskrit for sea, ocean, river, or water, and Pampillo feels that she is from the world’s oceans. Her acting career began as a young teenager in a musical TV series in Buenos Aires and she has had a critically-acclaimed and commercially-successful career for more than 20 years. She is now an independent artist with a social conscience and an environmental awareness, and is currently living in a beautiful country treehouse on Hawaii’s Big Island where she can focus on her music.

The ten songs on Sindhu use universal mantras and Pampillo’s own lyrics translated to Sanskrit. She has developed her unique sound as a composer and a producer by combining her South American roots with many other world influences, as well as by live looping her voice and other instruments. She wrote all ten songs on the album, one of which was co-composed with her son, Lucas Villemur. In addition to vocals (background as well as lead), Pampillo plays acoustic guitar, Venezuelan cuarto, programming, live looping, Tibetan bowls and chimes. Other musicians include Villemur on keyboards and electric guitar; Gerardo Gardelin on piano and strings; and Gary “Dov” Gertzweig on electric five-string violin, acoustic violin, viola, sitar and string samples. Pampillo’s cat, Mushu, also makes a special appearance by purring on “OM”!

Overall, the music is very relaxing, as Caro Pampillo’s voice is hypnotic and very soothing. Moving with the slow, smooth grace of a body of water, the instrumentation combined with the repetitive mantras creates a gentle atmosphere that is unhurried and stress-free. Most of the tracks run between seven and nine minutes each, giving each piece plenty of time to enchant and mesmerize. It is interesting to note that Pampillo started this project by recording the sounds of nature and animals such as birds, dolphins, a rooster and the purring of her cat. She then recorded the universal mantras and her own lyrics over those sounds, adding the instrumentation last with musicians who understood her concept and vision. The final mixing and mastering of the album was coordinated by Caro from Hawaii with Gary “Dov” Gertzweig in Los Angeles and Mario Siperman in Argentina.

Sindhu is a unique and fascinating project as well as a beautiful recording! It is available from Amazon, iTunes and CD Baby.

November 4, 2018
This review has been tagged as:
Debut AlbumsKathy's Favorites: 2018Kathy's Picks
Caro's Website Caro's Artist Page on MainlyPiano
Album Links
Amazon (referral)iTunes
This site contains affiliate links to products. We may receive a commission for purchases made through these links.