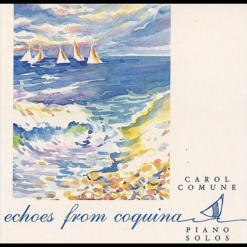 Carol's Website Carol's Artist Page on MainlyPiano
Album Links
Amazon (referral)iTunes
This site contains affiliate links to products. We may receive a commission for purchases made through these links.
Echoes From Coquina
Carol Comune
1991 / Elegant Entertainment
41 minutes
Review by Kathy Parsons
Released in 1991, Echoes From Coquina was pianist/composer/celebrated piano teacher and music educator Carol Comune’s second album, following her 1990 debut, Intracoastal. The album consists of seven piano solos that are a reflection on the serene lifestyle Comune experienced while on a trip to Florida’s Gulf Coast. Six of the pieces are original compositions and one is a beautiful performance of Claude Debussy’s “Clair de Lune.” The music often suggests the quiet ebb and flow of a peaceful ocean and sometimes sparkles like light dancing on the water. Comune’s background in classical music is apparent in her composing and performances, but she also brings a contemporary mindset to the music that is ageless, melodic and very accessible.

Echoes From Coquina begins with “Awakening,” a slow and very graceful piece that gradually builds as awareness does when someone wakes up from a deep and very comfortable sleep. Gentle and very soothing, there is no rush to start the day! “Song of the Palm Trees” hints at the stately nature of these trees as well as the movement of a breeze through the fronds and perhaps the activity of the wildlife that lives in the trees. Very free and relaxed, this piece is truly a pleasure to listen to! “Shell - Dance of the Coquinas” refers to the seashells that dance at the water’s edge at low tide. These delicate sea-creatures are often colorful and resemble butterflies, inspiring this light yet swirling piece. Rainbows are magical everywhere, but over the ocean, they can enchant even the most jaded beach walker. “Rainbows” gently expresses that breathless awe. If you have ever watched a sunset by the ocean, you know the profound peacefulness of the changing sky and the intensity of the colors reflected on the water. “Sundown” paints a vivid picture of this experience. Debussy’s “Clair de Lune (Moonlight)” has always been a favorite classic both to play and to listen to, and Comune’s performance is lyrical and expressive. “Quiet Nights, Distant Lightning” beautifully depicts the flashes of lightning on a dark sky. Exciting and unpredictable, sometimes they are bright flashes and sometimes flickers in the distance. There is no thunder, so this really is a dance of flashes of light against the dark sky.

Even though it was released twenty-six years ago, Echoes From Coquina is fresh and timeless. If you love peaceful music with a nature theme, be sure to check it out! It is available from www.CarolComune.com, Amazon, iTunes and CD Baby. Recommended!

February 14, 2017
This review has been tagged as:
Kathy's Picks
Carol's Website Carol's Artist Page on MainlyPiano
Album Links
Amazon (referral)iTunes
This site contains affiliate links to products. We may receive a commission for purchases made through these links.
More reviews of Carol Comune albums 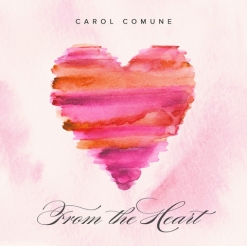 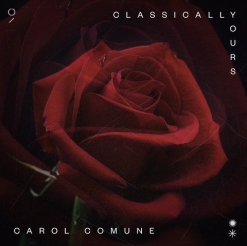 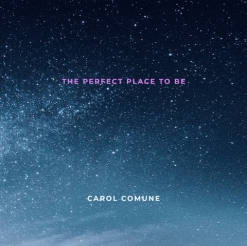 The Perfect Place To Be
2020
Classical