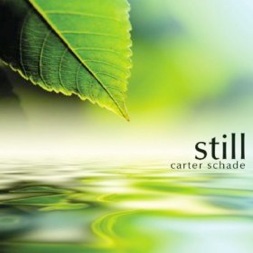 Carter's Website Carter's Artist Page on MainlyPiano
Album Links
Amazon (referral)iTunesSongbook Review
This site contains affiliate links to products. We may receive a commission for purchases made through these links.
Still
Carter Schade
2013 / Carter Schade
42 minutes
Review by Kathy Parsons
Carter Schade was all of twelve years old when he recorded his debut album, Still. I have to admit that I wasn’t expecting a whole lot from someone so young and debated how to review his work next to the recordings of more mature and experienced artists. Those thoughts never needed to enter my mind because this is the music of a mature artist already! No wonder they are calling him a prodigy. Seven of the ten solo piano tracks on the album are original compositions and the other three are original arrangements. Schade started piano lessons at the age of six and wrote his first piece at eight. The New England native is currently working on his second album, due to be released later this year. Still is an exceptionally impressive first effort, and I can’t wait to follow this young man’s musical career!

The title track opens the album with a piece that is expressive beyond the emotional capabilities of most boys his age. May Carter Schade never lose this beautiful flowing quality that seems to come from the depths of his soul! “Bridges” has a graceful, lyrical lilt that is soothing and uplifting. “Hope” was inspired by “It Is Well With My Soul.” The very recognizable melody drifts in and out of Schade’s original themes, making this a beautiful and very personal interpretation of a time-honored hymn. I really like the dramatic contrasts in “Again,” which begins gently and thoughtfully, gradually building to a more powerful climax and returning to the quieter first theme, slowly re-gathering its previousenergy (but not as much as the first time) - a very intriguing piece! “A Twilight Star” contains threads of “Twinkle, Twinkle, Little Star” but is mostly a poignant and peaceful original played with confidence and conviction. “The Water Is Wide” seems to be appearing everywhere these days, but its lovely, heartfelt melody is a favorite for many. Carter’s arrangement is somewhat livelier than many versions I’ve heard but preserves the compelling quality of the melody. “After the Rain” is my favorite of the ten pieces. It begins with a very spare theme that gradually builds in complexity as well as energy and drama, peaks, and then slowly winds down - very descriptive and effective! As its title implies, “Days Gone By” is reflective and nostalgic as it recounts a variety of experiences and moods and brings this outstanding first album to a satisfying close.

Bravo, Carter Schade! You are off to an amazing start! Still is available from www.CarterSchade.com, Amazon, iTunes, and CD Baby. Both thumbs up!
March 28, 2014
This review has been tagged as:
Debut Albums
Carter's Website Carter's Artist Page on MainlyPiano
Album Links
Amazon (referral)iTunesSongbook Review
This site contains affiliate links to products. We may receive a commission for purchases made through these links.