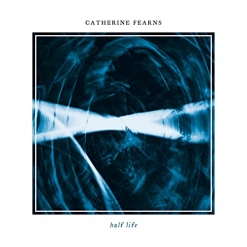 Catherine's Website Catherine's Artist Page on MainlyPiano Blue Spiral Records' Website Blue Spiral Records' Artist Page on MainlyPiano
Album Links
Amazon (referral)Apple/iTunesSpotify
This site contains affiliate links to products. We may receive a commission for purchases made through these links.
Half Life
Catherine Fearns and Blue Spiral Records
2022 / Blue Spiral Records
30 minutes
Review by Kathy Parsons
Half Life is the first solo piano album by Catherine Fearns, a British writer, musician and composer now living in Switzerland. A classically-trained pianist, Catherine plays guitar and keyboards along with writing songs for the international all-female heavy metal project, Chaos Rising. She also collaborates on several other music projects and has been widely published as a music journalist specializing in heavy metal. She has written an award-winning crime fiction series called Reprobation. As you can imagine, with all of these influences, Catherine's solo piano music is very difficult to put into a specific category - something I always appreciate! The twelve tracks range from quiet and thoughtful to turbulent and much more dynamic. A short selection of titles gives you an idea: "Children," "Someone To Kill For," "Wedding Grave," and "Hymnal" - quite a varied selection of subject matter! A couple of the tracks feature additional instrumentation, but most are solo piano.

Half Life begins with "Children," a piece that expresses both tenderness and an intense, sometimes frantic, energy. Much like children, the piece is constantly changing, moving in different directions. It also clearly demonstrates Catherine Fearns' mastery of the piano. Although the title is a bit enigmatic, "Desire Paths" expresses deep passions and stirring emotions that vary from light and airy to dark and chaotic. Much of this piece has strong classical influences that again show Fearns' command of the piano keyboard - fearless in the "bigger" passages and gently nuanced in the quieter ones. "Cyclades" refers to a group of 39 Greek islands in the Aegean Sea, 24 of which are inhabited. With passages that are bold and rugged and others that include snippets of Greek-sounding music, a vivid picture is created with piano keys rather than visuals. I assume "L'Arve" refers to the river that runs in France and Switzerland. The beautifully flowing energy that courses throughout the piece suggests a sense of adventure as well as freedom and strength - one of my favorites on the album! "Someone To Kill For" is a fascinating mix of heavy metal and classical influences. It begins with a dark and heavy intro in the deep bass of the piano and then alternates with much gentler and more melodic themes that express a variety of emotions. It's really interesting how the two seemingly opposite musical styles can work together so well! The intense and rather chaotic title track runs for just 1 1/2 minutes, but packs a whole lot of notes into that short space! "Postindustrial" combines acoustic piano with pulsating electronic effects to convey a message that seems apocalyptic and foreboding. "Wedding Grave" begins with a dark snippet of the wedding recessional played on organ and piano. The rest of the piece conveys the regret and sadness of a failed marriage mixed with anger and frustration (been there!). "Hymnal," by far the longest piece on the album at 5 1/4 minutes, mixes piano and keyboard into interpretations of passages from actual hymns along with original music. Sometimes stately and sometimes less formal, it's my favorite track on the album!