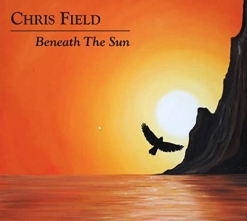 Chris' Website Chris' Artist Page on MainlyPiano
Album Links
Amazon (referral)Apple/iTunesSpotify
This site contains affiliate links to products. We may receive a commission for purchases made through these links.
Beneath the Sun
Chris Field
2020 / Tosca Road
51 minutes
Review by Kathy Parsons
Until recently, I didn’t know that Film Trailer Music was even a genre. Film music, yes, but film trailer music? I had aways assumed that excerpts from the actual movie soundtracks were used in film trailers, but that’s not necessarily true. Chris Field is one of the leading and most successful film trailer composers ever and is recognized by his peers as having started a new direction in film music. In many cases, film music (other than the opening and closing themes) is supposed to go unnoticed, adding tonal colors and enhancements to the film-watching experience, but it can’t divert people’s attention away from the film itself. On the other hand, film trailers are supposed to be powerful and attractive in order to make people want to see the actual movie. Field’s themes are grounded in classical composition but also reflect his rock background. Big, dramatic and inspiring, Field’s music has been used in trailers for Lord of the Rings, Pirates of the Caribbean, Atonement, The Secret, and Harry Potter, to name a few, and some of the eleven tracks on Beneath the Sun are built on themes that were used in film trailers. This is Chris Field’s second album, following Sub-Conscious (2006), which was awarded “Best Neo-Classical Album For 2006” by New Age Reporter.

Beneath the Sun begins with “Time Will Tell,” a piece used in the trailer for Kinsey (2004). Sometimes big and powerful with full orchestration and sometimes delicate and haunting with Native flute, it’s a breathtaking opener! “Metamorphosis” is a new, more ambient piece with mostly symphonic strings plus drums, percussion, and an assortment of other instruments. “From the Heart” mixes piano and strings in a gentle but deeply emotional piece that becomes more orchestrated as it evolves. “Summerland” is another new piece and does a great job of combining rock and classical forces by utilizing orchestral strings with electric guitars, keyboard and percussion - both exciting and soothing, if that’s even possible. The title track does something similar, but is much bigger and more dramatic. Almost seven minutes long, “Interlude” is darkly mysterious and intense, putting us into an imaginary situation of our own making. Much of the piece is ambient with drums, a repeated guitar pattern, keyboards and a touch of magic. “The Vision” was used for Atonement (2007) and is “the slow build of a moment’s realization” (quoting promotional materials). More ambient than melodic, strings, piano and flute create suspense with a dramatic effect. “The Journey” is derived from Field’s music for the end title credits of the movie The Secret. Heart-tugging while expressing a sense of adventure, it’s a great piece with strings, flutes and driving percussion.

Beneath the Sun covers a huge amount of musical territory yet holds together beautifully - and it taught me about film trailer music! The album is available from Amazon, Apple Music/ iTunes, Spotify and other outlets. Don’t miss this one!

December 24, 2020
This review has been tagged as:
Latest Reviews
Chris' Website Chris' Artist Page on MainlyPiano
Album Links
Amazon (referral)Apple/iTunesSpotify
This site contains affiliate links to products. We may receive a commission for purchases made through these links.