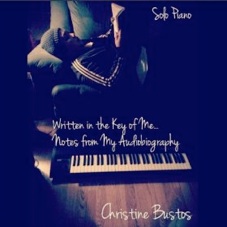 Christine's Website Christine's Artist Page on MainlyPiano
Album Links
Amazon (referral)iTunes
This site contains affiliate links to products. We may receive a commission for purchases made through these links.
Written in the Key of Me: Notes from My Audiobiography
Christine Bustos
2014 / Christine Bustos
42 minutes
Review by Kathy Parsons
Writing a review of Christine Bustos’ Written in the Key of Me: Notes from My Audiobiography is a very special pleasure because it is the first CD I’ve reviewed by a former piano student of mine. Christine found me sometime ago on Facebook and when she asked if I’d give her new CD a listen, I agreed, not really expecting to be blown away by the music. I was and am! A very gifted musician even as a child, Christine started playing the piano for her church when she was quite young, often improvising hymns and making up songs as she played. As far as I can remember, that was in the late 1980’s and early 1990’s, so it’s been awhile.

Written in the Key of Me: Notes from My Audiobiography is a group of unpolished personal recordings that were not originally intended to be released. Bustos was recording a diary without inhibition, “finding herself in imperfection.” The eleven original piano solos were often inspired by her two daughters as well as other events and people in her life. The music is very melodic with a lovely, flowing quality, and each piece comes from a special place in Christine’s heart, played very expressively and with deep emotion.

Written in the Key of Me begins with “Behavior,” a somber, melancholy piece that gradually lightens as it evolves, telling its story with great feeling and sincerity. “Crimson Tide” has a dark intensity and passion that make it compelling. I’ve often said that the piano is the perfect instrument for depicting rain, and Christine figured out the secrets for making “Raindrop Reflection” percussive without being harsh. The slow tempo and poignant melody give it the feeling of watching or listening to the rain late at night. “Keiki Lullaby” is my favorite track - so simple and yet so evocative and soothing. “Train to Tachikawa” picks up the tempo and spirit a bit with lots of deep bass accents and a sense of moving forward. “Midori” is another favorite. Slow, introspective, and passionate, it’s beauty! “Beyond the Limit” has the graceful flow and warmth of a romantic slow dance. “The Fragile Child” feels very spontaneous - an outpouring of deep emotion, perhaps late in the night. “Footprints to Forever (A Walk With Gail)” is a tender tribute to a dear friend who recently passed away. Overflowing with love and hope, it’s a wonderful memorial that comes from the heart.

Christine Bustos is off to a fantastic start with her recording career and has touched me deeply with her music! Written in the Key of Me: Notes from My Audiobiography is available for download from Amazon, iTunes, and CD Baby. Very highly recommended!
July 22, 2014
This review has been tagged as:
Debut Albums
Christine's Website Christine's Artist Page on MainlyPiano
Album Links
Amazon (referral)iTunes
This site contains affiliate links to products. We may receive a commission for purchases made through these links.