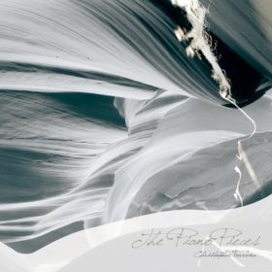 Christopher's Website Christopher's Artist Page on MainlyPiano
Album Links
Amazon (referral)iTunesSongbook Review
This site contains affiliate links to products. We may receive a commission for purchases made through these links.
The Piano Pieces
Christopher Ferreira
2011 / Christopher Ferreira
47 minutes
Review by Kathy Parsons
The Piano Pieces is the debut solo piano release from Christopher Ferreira, a pianist/composer from Oakland, CA. Very classically-influenced with a contemporary perspective, the music is powerful, evocative, and deeply emotional. Ferreira’s music has had such a strong effect on me that I’m sure this CD will be on my Favorites list for 2011. Ferreira studied privately at the San Francisco Conservatory of Music and that plus a love for musical theater that was developed in high school led Ferreira to begin composing for piano, guitar, and other instruments. From there, he went on to score several independent films, with Illusion starring Kirk Douglas being his first major independent feature film in 2004. He has also composed music for student films, theater, web projects, dance, and industrial commercials. The Piano Pieces is a collection of original piano solos that Ferreira composed over the past several years. It was recorded at Skywalker Studios by Grammy Award-winning engineer Leslie Ann Jones. The sound quality is superb, and the piano itself has a rich, full tone.

The Piano Pieces begins with “Debut,” a dreamy waltz that conveys a wistful, melancholy mood - a charming way to start! I love “A Minor Waltz,” which goes much darker, creating a mysterious short story that never quite reveals its plot. It isn’t a tale of danger, but it’s not quite comfortable either. The beginning of “Waves” has a gently undulating rhythm that suggests ripples in continuous motion. As the piece evolves, the right hand melody becomes bigger and more expressive, suggesting the tidal ebb and flow with light dancing on the waves. “Goodnight Moon” is a sweet and tender lullaby. “Beatrice” is a spare yet very dramatic multi-movement piece. Flowing and elegant, it seems especially well-suited to a dance production. “The Farmer” paints a portrait of strength, gentleness, and hardship. Composed in 3/4 time, the waltz rhythm adds grace and simplicity to the otherwise complex story. I also really like “Crystal Winter.” A pattern of hushed broken chords on the left hand counters the brighter and sometimes stark right hand. Truly a “cool” piece! “A Fragile Campaign” is my favorite track. At almost nine minutes, it’s a very large work that goes through many changes as it slowly evolves. Sometimes delicate and haunting, sometimes almost playful, and sometimes very dark and dramatic, it’s incredibly powerful and makes my fingers itch. I hope Ferreira makes the sheet music available at some point! The closing track is a lovely piece simply titled “The Dancer.” Graceful and dream-like, it’s a beautiful conclusion to an amazing album.

The Piano Pieces is an extraordinary debut from Christopher Ferreira, and I hope it’s only the beginning of his solo piano career! The album is available from christopherferreira.com, Amazon, and iTunes. I give it my highest recommendation. Bravo!!!

There is a companion sheet music collection of all of these songs available from christopherferreira.com that I also very highly recommend! A review of the book is also on MainlyPiano.com.
April 7, 2011
This review has been tagged as:
Debut AlbumsKathy's Favorites: 2011
Christopher's Website Christopher's Artist Page on MainlyPiano
Album Links
Amazon (referral)iTunesSongbook Review
This site contains affiliate links to products. We may receive a commission for purchases made through these links.