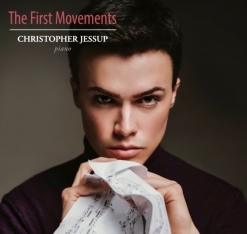 Christopher's Website Christopher's Artist Page on MainlyPiano
Album Links
AmazonApple/iTunesSpotify
This site contains affiliate links to products. We may receive a commission for purchases made through these links.
The First Movements
Christopher Jessup
2021 / Christopher Jessup
36 minutes
Review by Kathy Parsons
The First Movements is a fascinating project by award-winning classical pianist/composer Christopher Jessup. "The concept of this album was to play only first movements of several cornerstones of the piano repertoire, offering a 'tasting menu' of both me as a pianist and the compositions themselves." With works by Haydn, Grieg, Mozart, Ravel, Bach and Beethoven plus bonus tracks by Grieg and Jessup himself, we are taken on a musical excursion that covers more than 300 years of piano music! Whew! And yet the album flows beautifully without any jarring changes in mood or approach.

I don't consider myself a classical music academic by any means, but I taught piano for many years (contemporary as well as classical music) and have been a reviewer (not a critic) for a long time as well. In other words, while I'm not really a classical music specialist, I know what I like and I know a brilliant pianist when I hear one - and Jessup is amazing! I have often felt that many classical recordings sacrifice colorful expression and the joy of playing for precision to both the printed scores and to tradition. Historically, it has been the innovators who have "dared to be different" who have kept all of the arts alive and evolving and I find Jessup's approach both refreshing and inspiring.

Christopher Jessup attended The Juilliard School for both pre-college and college, graduating with high honors in 2021. He has already performed at Carnegie Hall more than a dozen times with two solo concerts coming up. He has performed in concert throughout Europe and has released albums independently as well as on American and European record labels. His awards include National Sawdust’s BluePrint Fellowship, a Young Steinway Artist Designation, and top prizes in the Metropolitan Youth Orchestra’s Composers Competition, Princeton Piano Competition, and Bradshaw & Buono International Competition. Obviously a young artist well on his way to a brilliant career as both a performing artist and a composer, it will be exciting to see (and hear!) what he does next.

The First Movements is available digitally (Jessup sold out of all of his CDs!) to download or stream from websites such Amazon, Apple Music/iTunes and Spotify. Very highly recommended!

April 29, 2022
This review has been tagged as:
ClassicalLatest ReviewsModern Classical
Christopher's Website Christopher's Artist Page on MainlyPiano
Album Links
AmazonApple/iTunesSpotify
This site contains affiliate links to products. We may receive a commission for purchases made through these links.