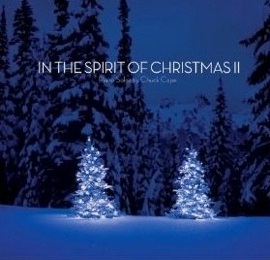 Chuck's Website Chuck's Artist Page on MainlyPiano
Album Links
AmazoniTunes
This site contains affiliate links to products. We may receive a commission for purchases made through these links.
In the Spirit of Christmas II
Chuck Cape
2012 / Chuck Cape
50 minutes
Review by Kathy Parsons
In the Spirit of Christmas II is the solo piano follow-up to Chuck Cape’s 2010 debut, In the Spirit of Christmas. In the same vein as his first album, this is a collection of thirteen traditional and original songs of the season, updated and given a variety of treatments from soft and gentle to exuberant and joyful. Cape is a very accomplished pianist who seems to be comfortable with many different musical styles and genres, giving the album plenty of variety. Conversely, if you are looking for a full album of quiet piano music, this one probably won’t work. Most of the songs are on the peaceful, reflective side, but a few are very “big” and showy. I like the variety and Cape did a great job of selecting the playing order of the songs, giving the album a really good flow.

In the Spirit of Christmas II begins with a rousing arrangement of “Deck the Halls.” Big, bold, and full of fun, this is an exciting opening! “Swirls” is the first of the originals. Gentle, smooth, and very graceful, it reminds me of watching effortless ice skaters gliding across a rink or frozen lake. I’ve heard and played some funky arrangements of “Santa Claus Is Coming to Town,” but Cape’s version tops them all! Crank up the volume and let it rattle the windows! Over the past several years, it seems like “O Holy Night” has been getting quieter and quieter, in large contrast to the passionate, dramatic versions I grew up with. Cape’s arrangement has a bit of both, becoming more powerful as it evolves. “Simple Gifts” isn’t very simple in this spirited and effervescent version - a great arrangement! “Hymn For the Appalachians” is a favorite. Slow and soulful, it has the feel of a folk song fleshed out just enough to make it a full and elegant piano solo. “Sussex Carol” is lively and very joyful - almost dancelike. “In the Bleak Midwinter” seems to have become a favorite of many instrumental artists, and Cape’s version is delicate in some parts and bold in others - a very enjoyable interpretation. “Home For Christmas” is a beautiful ballad overflowing with sincere emotions and sentimental memories - another favorite. “Once In Royal David’s City” cranks it up again with a lively rhythm and a “joyful noise” that spins and dances with delight. “Silent Night” becomes very still, gentle, and delicate, telling its story with reverence and a spirit of peace. Beautiful!

In the Spirit of Christmas II is a really nice addition to anyone’s Christmas music collection. It’s available from Amazon, iTunes, and CD Baby. Check it out!
December 3, 2012
This review has been tagged as:
Holiday Albums
Chuck's Website Chuck's Artist Page on MainlyPiano
Album Links
AmazoniTunes
This site contains affiliate links to products. We may receive a commission for purchases made through these links.
More reviews of Chuck Cape albums 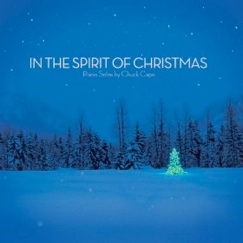 In the Spirit of Christmas
2010
Debut AlbumsHoliday Albums