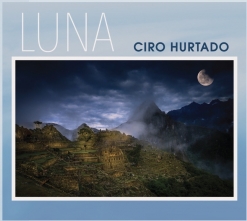 Ciro's Website Ciro's Artist Page on MainlyPiano
Album Links
Amazon (referral)Apple/iTunesSpotify
This site contains affiliate links to products. We may receive a commission for purchases made through these links.
Luna
Ciro Hurtado
2021 / CD Baby
42 minutes
Review by Kathy Parsons
Luna is the eleventh album from award-winning guitarist Ciro Hurtado (he has also recorded seven albums with the acclaimed Latin American folk jazz ensemble Huayucaltia). Born and raised in Peru, Hurtado arrived in the United States in 1975 and studied at the Guitar Institute of Technology in Los Angeles. A highly-acclaimed guitarist, Hurtado's music ranges from traditional Latin American genres to the more sophisticated Latin/Jazz fusion. He is also acknowledged as a top composer, arranger and producer of Latin-based/ new age/ global fusion. He performs on acoustic and electric guitars, as well as traditional Latin American instruments and his command of the guitar utilizes classical techniques as well as folk, rock and jazz styles. Hurtado often performs and records with his wife and musical partner, Cindy Harding, who sings and plays a variety of traditional flutes and other ethnic instruments and co-produced this album. Three of the nine pieces on Luna have vocals sung in Spanish and three feature the Venezuela Strings Recording Ensemble. The music is varied and compelling, woven together by the heart and soul of Ciro Hurtado and his musical guest artists.

Luna begins with "Camino," a solo piece played on the Ronroco, a small 10-stringed guitar-like instrument from the Andes region that is similar to the charango. The title means "road" or "path," and the piece serves as the trail head of our musical journey. The tempo is leisurely, but purposeful. I absolutely love the title track, an instrumental with guitar (Hurtado), Andean flutes (Harding), and bombo leguero (an Argentinian folk drum) played by Julio Ledezma. Haunting and deeply emotional, it's my favorite track on the album. "Amor en Pandemia" translates as "Pandemic Love" and is another favorite. Milena Salamanca's expressive voice reflects the loss and sadness felt throughout the world during the COVID-19 pandemic and goes straight to the heart. Mostly guitar and vocal, the piece also features the Venezuela Strings Recording Ensemble. "Andean Celtic" is a fascinating combination of distinctly different styles of music - or are they? Guitar, flutes (Harding) and bodhran (Ledezma) create a beautiful fusion that is lilting and sometimes soars. "Amanecer" ("Dawn") has the feeling of a soundtrack welcoming a "new dawn" as the COVID-19 pandemic recedes. Fully-orchestrated in addition to the flute and guitar leads, the warmth and optimism of the piece are "infectious"! "Luna Llena" is a vocal arrangement of the title tune, sung by Milena Salamanca and featuring Gary Johnson on organ. "Del Norte Soy" brings the album to a close with a nod to Mexico. Cindy Harding and her sister, Libby Harding, sing and play traditional instruments along with Hurtado on guitar, Gary Johnson on keyboard harp and Julio Ledezma on cajon. Spirited and lively, it's a great ending to a great album!

Luna is available from Amazon, Apple/iTunes and streaming sites such as Spotify. Very highly recommended!
July 31, 2021
This review has been tagged as:
Guitar musicLatest Reviews
Ciro's Website Ciro's Artist Page on MainlyPiano
Album Links
Amazon (referral)Apple/iTunesSpotify
This site contains affiliate links to products. We may receive a commission for purchases made through these links.
More reviews of Ciro Hurtado albums 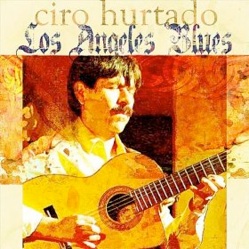 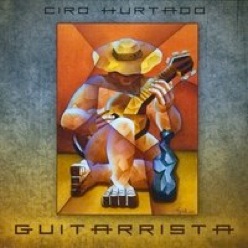