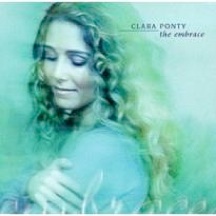 Clara's Website Clara's Artist Page on MainlyPiano
Album Links
Amazon (referral)iTunes
This site contains affiliate links to products. We may receive a commission for purchases made through these links.
The Embrace
Clara Ponty
1999 / Philips
43 minutes
Review by Kathy Parsons
Not many musicians in any genre come with such extensive credentials or musical genes, but Clara Ponty fully lives up to both. I’ve been listening to some great albums, but The Embrace rises to the top in its musical complexity, integrity, and pure artistry. Trained to compete as a classical pianist on an international level, Clara has always been surrounded with some of the top musicians in the world (obviously including her father, renowned jazz violinist Jon-Luc Ponty). Although leaning to the classical side, Clara is able to seamlessly incorporate her many influences into a contemporary statement all her own. I love Clara’s first album, but found it difficult to get into at first (well-worth the patience to gain access, though!). The Embrace is much more accessible, but is in no way commercial. The complexity remains, but this new album is somehow more open on the first listen and then continues to reveal itself with time and repeated hearings. Clara attributes this to drawing from within in an “expressionist” mode rather than the more external “impressionism”. A very interesting addition on The Embrace is the use of Clara’s voice as another musical instrument. There are no lyrics, and the vocals add warmth and a very feminine touch. Each track on The Embrace is a gem, and each is uniquely itself. Clara’s amazing piano technique shines through on each piece, and she is joined by a fascinating combination of musicians and instruments including cello, ney flute, cloud organ, 36 string zither, bouzouki, etc. It’s difficult to single out any favorites from such a strong collection, but “Pierrot”’s rhythm and simple melody are hypnotic; the solo piano on “Rapture” swoops and soars; and the sweetness and innocence of “Les Berceaux (The Cradles)” are captivating. A treasure from start to finish, I give The Embrace my highest recommendation.

September 9, 1999
This review has been tagged as:
Kathy's Favorites: 1999
Clara's Website Clara's Artist Page on MainlyPiano
Album Links
Amazon (referral)iTunes
This site contains affiliate links to products. We may receive a commission for purchases made through these links.
More reviews of Clara Ponty albums 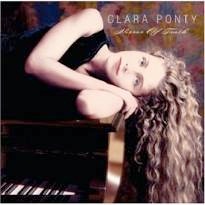 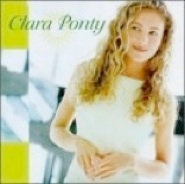