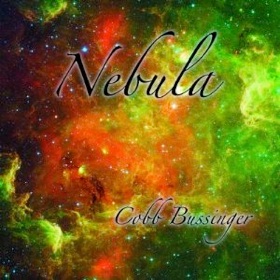 Cobb's Website Cobb's Artist Page on MainlyPiano
Album Links
Amazon (referral)iTunes
This site contains affiliate links to products. We may receive a commission for purchases made through these links.
Nebula
Cobb Bussinger
2012 / Moving Canvas Music
46 minutes
Review by Kathy Parsons
Nebula is an exciting and eclectic collection of nine original instrumental pieces sharing the theme of deep space composed, recorded, and produced by Cobb Bussinger. I reviewed Bussinger’s last solo piano release in 2006, and Nebula is completely different. A bit edgier than most albums classified as new age, the instrumentation includes piano, bass, drums, synths, violin, guitar, bansuri flute, sitar, tablas, and other hand percussion. Sometimes very rhythmic and sometimes more ambient, several tracks have strong Middle Eastern and Eastern European influences mixed with a variety of more Western musical styles. The composer for many documentaries, films, and television projects, Bussinger studied Classical Piano Performance as well as 18th and 19th Century Music Theory and Composition at Combs College of Music. He also studied Film Production at UCLA Film School. He is currently living in El Paso, TX and stays busy in his state of the art studio composing, producing, orchestrating, and recording music for a variety of projects, some of which can be heard on HBO, The History Channel, ESPN, The Discovery Channel, and various national TV news buffers. Some of the music on Nebula is big and very dramatic, and I really enjoyed it while was driving along the Oregon Coast last week (as well as listening to it at home).

Nebula begins with “Alpha Centauri,” named for the brightest star (actually two stars) in the southern constellation of Centaurus. Rhythmic and a bit mysterious, it contains elements of a wide variety of musical styles, making it a rather “universal” theme and a great beginning. Europa is one of the largest moons in the solar system, and the piece named for it is graceful and sweeping with instrumentation that includes piano, strings, guitar, and a lovely female voice. “Aurora” is named for the natural light show in the sky that occurs most often in the higher latitudes. Much more ambient and atmospheric, the rhythmic guitars and percussion are a hypnotic counterpart to the floating “space music” they accompany - I really like this one! “Red Giant” is another favorite. At almost nine minutes, it has plenty of time to evolve and develop, blurring the lines between the prog rock and ambient genres with its often very dramatic style and pulsating rhythms. The title track is a swirling blend of musical styles that mixes Eastern musical influences and Western jazz/rock/ambient/classical with strong percussion, strings, piano, synths, and guitar - a veritable musical stew that is vibrant and very exciting. “Oceanus” is a bit lighter and more playful yet very graceful and beautiful. “Nibiru” is also known as Planet X, and it was long predicted (not by scientists) that it would collide with Earth on 12/21/2012, possibly bringing about the end of the world as we know it. Well, I’m writing this review two days after that date, and it didn’t happen - whew! The sound of chanting mixed with dark space music is eerie and very effective. A blend of ethnic musical styles then creates a sense of urgency and mystery, ending with a female voice speaking in a foreign language and then fading out. Great stuff!

Nebula is a thrilling musical journey through space and an exhilarating musical experience. It is available from Amazon, iTunes, and CD Baby. Recommended!
December 12, 2012
Cobb's Website Cobb's Artist Page on MainlyPiano
Album Links
Amazon (referral)iTunes
This site contains affiliate links to products. We may receive a commission for purchases made through these links.
More reviews of Cobb Bussinger albums 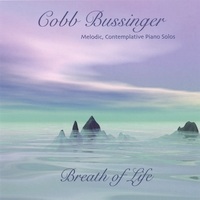