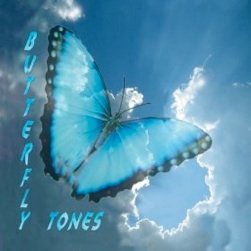 Coburn's Website Coburn's Artist Page on MainlyPiano
Album Links
Amazon (referral)iTunes
This site contains affiliate links to products. We may receive a commission for purchases made through these links.
Butterfly Tones
Coburn Tuller
2011 / Coburn Tuller
66 minutes
Review by Kathy Parsons
I believe this is the first review I’ve ever written about a musical instrument that is brand new! Coburn Tuller has spent the past fifteen years developing and perfecting the instrument he calls The Tones. Inspired by the sound of wind chimes “wafting through the air” during a midnight walk, Tuller went out and bought a piece of aluminum tubing and struck it with a mallet. The tubing responded with a perfect Bb that resonated for more than a minute, and an idea and its corresponding passion were born. The finished Tones stands at more than eight feet tall and consists of three pyramid-shaped frames that hold ninety aluminum and brass tubes that range from 7” to more than 4’ long. “The Tones have a natural sustain and reverberation sometimes lasting as much as 2 minutes and creating overlays of harmonious sound behind the melodies. These overlays produce one of the most unique aspects of The Tones - the music she plays after the piece ends. This is a favorite part for many listeners and is showcased in the long fade outs.” (quoted from Tuller’s brochure for The Tones.) Tuller also says, “If butterflies could sing, perhaps it would sound something like this.” Hence the name of his creation. I have included the back of the CD jacket, which has a photo of The Tones so you can see it for yourself.

The Butterfly Tones CD consists of nine original tracks ranging in duration from 2’21” to 10’55” - four are more than ten minutes long. The sound of The Tones resembles wind chimes, but Tuller creates melodies rather than making the random sounds of wind chimes. The resonating hum of The Tones also resembles the sound of singing bowls, but since Tuller is striking the tubes with a mallet, he has more control of the pitches of the hum. Because of the percussive nature of a performance on The Tones, it is also possible for interesting rhythms to be created, making this a more versatile instrument than one might expect. Some of the tracks have a more ambient than melodic feeling, and each piece stands on it’s own as unique. I would think this music would be an ideal accompaniment for massage, meditation, and relaxation by allowing The Tones to take a person’s focus and consciousness into a new musical realm altogether. It could also help with sleep difficulties, as the sounds are slow, soothing, and rather hypnotic.

Butterfly Tones is a very different musical experience and one well worth checking out! It is available from Amazon, iTunes, and CD Baby. Recommended especially for the musically adventurous.

May 31, 2011
This review has been tagged as:
Other Solo Instruments
Coburn's Website Coburn's Artist Page on MainlyPiano
Album Links
Amazon (referral)iTunes
This site contains affiliate links to products. We may receive a commission for purchases made through these links.