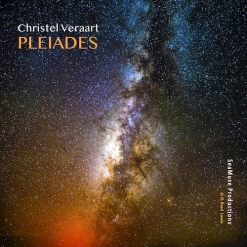 Christel's Website Christel's Artist Page on MainlyPiano
Album Links
Amazon (referral)Apple/iTunesSpotifyBandcamp
This site contains affiliate links to products. We may receive a commission for purchases made through these links.
Pleiades
Christel Veraart
2020 / SeaMuse Productions
53 minutes
Review by Kathy Parsons
For her 10th album, Pleiades, vocalist / composer / multi-instrumentalist Christel Veraart pays homage to the cluster of seven stars known as The Pleiades. Also known as “The Seven Sisters,” there is one track named for each sister and the messages that they whisper into the spheres. Christel composed the music, sings the lyrics in imaginary languages, and plays a variety of traditional and ethnic instruments to express the beauty and mystery of these stars that have guided and fascinated people all over the world for centuries. Soothing and ambient with more than a touch of magic, I can easily see this album hitting the top of the charts in no time! Essentially a one-person production, Christel composed, arranged and performed the music. She wrote the lyrics in imaginary languages and sings them as well. She also performed on all of the instruments, including duduk, percussion, harp, strings, piano, dizi flute, Tibetan bowls and miscellaneous ambient sound effects. She produced and recorded the album in her studio in Sedona, AZ.

Truly an international artist who has lived and worked in many parts of the world, Christel Veraart’s music has been featured in film, dance and stage productions as well as on her own recordings. Her compositions range from solo and small ensembles to large orchestral works and draw from a wide variety of musical and cultural influences. Christel grew up in The Netherlands and was trained in classical piano and voice, but found her own voice when she started roaming the world at an early age. Recently, she has been drawn to space music, which focuses on texture rather than formal compositional styles. Her 2019 album, Lotus Dreams, hinted at that direction, and Pleiades takes that exploration even further.

As I mentioned, the seven tracks are titled for each of the seven Pleiades. “Taygete” begins the album with haunting vocals, a mysterious droning sound, and various effects that suggest water, light and darkness. “Maia” begins with a simple but very melancholy harp intro that continues behind the mournful vocals. “Asterope” has lighter, more playful instrumentation with a slightly Latin feeling, but the vocals are very poignant - beautiful! “Merope” is more orchestrated with strings and ambient effects behind the soaring vocals. “Celaeno” warms things up a bit with a gentle Latin rhythm that sways with the movement of a light tropical breeze. “Alcyone” shares a similar theme to “Taygete” with more drum, light bells and flute. “Electra” features more piano than the other tracks along with heartfelt vocals and ambient effects.

Pleiades is a fascinating musical exploration and a very beautiful listening experience as well. The album is available from sites such as Amazon, Apple Music/iTunes, Bandcamp and Spotify.
October 30, 2020
This review has been tagged as:
ZMR Winner
Christel's Website Christel's Artist Page on MainlyPiano
Album Links
Amazon (referral)Apple/iTunesSpotifyBandcamp
This site contains affiliate links to products. We may receive a commission for purchases made through these links.